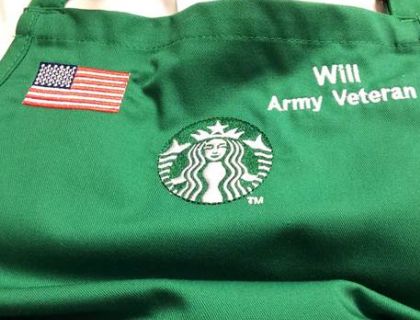 What a gift, timed perfectly for Veterans Day: Seattle-based coffee giant Starbucks has just announced that it will now extend a 100% tuition-free four-year college benefit to the spouse or child of every U.S. veteran or active military reservist employed 20 or more hours a week.

This new benefit, whose zero-tuition price point results from a 42-58 partnership between ASU and Starbucks, will be an additional benefit atop the previously-announced college benefit (also four years, 100% tuition free) that Starbucks extends to every employee who works 20 hours per week or more, which is offered through the online campus of Arizona State University (ASU), an accredited (and generally well-respected) institution, in an approach that has been lauded by the leadership of the U.S. Department of Education.

Starbucks will also now be paying for up to 80 hours per year for service obligations of employees who are active duty or reservists in the U.S. Armed Forces or National Guard.

At the same time, Starbucks also announced a variety of other benefits, support, and milestones related to the employment of U.S. veterans, active military reservists and military spouses.

These include two achievement milestones in its provision of services for veterans and their families:

• Starbucks announced that it has already succeeded in hiring more than 5,500 veterans and military spouses, fulfilling more than 50% of the commitment made just two years ago to employ at least 10,000 vets and their spouses by 2018. In order to achieve this, Starbucks has invested in several specific strategies: It hired four dedicated military recruiters in key focus cities across the country including Seattle, D.C. and Austin, established more than 80 connections with military bases, installation transition and educational offices across the country and overseas, attended more than 200 military hiring fairs across the nation that recruit veterans and military spouses, and expanded their employee affinity group, the Starbucks Armed Forces Network, from one to 12 regional chapters. (Starbucks Armed Forces Network is intended to connect veterans and create mentorships across the company to ease transition from military to civilian life.)