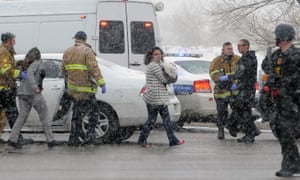 People are escorted away from the scene by police after a gunman opened fire at a Planned Parenthood facility in Colorado Springs on Friday. Photograph: Daniel Owen/ZUMA Press/Corbis

Colorado Springs, the location of an attack on a Planned Parenthood clinic that left three people dead, is a centre of rightwing Christian culture with a “wild west mentality” when it comes to guns.

The attack, by a lone gunman carrying a rifle or shotgun, took place at a clinic that is the site of regular anti-abortion protests by the city’s pro-life Christian groups.

Planned Parenthood, aware of hostility about their work, recently moved to the new facility, hoping it would provide more security for staff.

The building has been likened to a fortress by anti-abortion campaigners and Friday’s attacks revealed that it is equipped with “safe rooms” for staff to shelter in the event of such an event. It also has an extensive security camera system.

With anti-abortion policies supported by many Republican presidential candidates such as Ted Cruz, Rand Paul and Jeb Bush, rhetoric attacking Planned Parenthood and other such organisations is not hard to find in the city.

Last spring, following the gruesome attack on a Colorado woman who had her unborn-baby ripped from her womb with a knife, state representative and Springs resident Gordon Klingenschmitt said the attack was “the curse of God upon America for our sin of not protecting innocent children in the womb”.

Colorado’s second largest city, with a population of 445,800, has built itself a reputation as a playground for white, pro-gun, pro-life Evangelical Christians. It is also home to one army base, two air force bases, and an air force.

Colorado Springs featured in the documentary film Jesus Camp, where evangelical Christian children were taught to engage in anti-abortion protests. Two of the film’s lead characters travelled to the New Life Church in Colorado Springs, where they met church pastor Ted Haggard, a one-time leader of the National Association of Evangelicals who had weekly communications with president George W Bush. Haggard resigned from his position later that same year following revelations that he purchased methamphetamine and the services of a male prostitute.

The city’s pro-gun contingent flexed its muscles in 2014 with an unprecedented recall election, ousting state senator John Morse. The recall was primarily motivated by new gun control laws in Colorado – following the Aurora cinema shootings in Denver – which banned magazines holding more than 15 rounds, and demanded a universal background check for all gun purchases.

As the first state to legalise abortion and the first to implement a regulated marijuana market, Colorado is a state that doesn’t take kindly to government infringements on personal rights.

Three weeks before Friday’s Planned Parenthood shooting, a man was seen brandishing a rifle while walking down the streets of Colorado Springs on Halloween morning. A concerned citizen called the 911 Emergency Line to notify the police, but was told by the operator: “Well, it is an open carry state, so he can have a weapon with him or walking around with it,” referencing state laws that allow the brandishing of a firearm in public.

Shortly after the call the man shot and killed three people before being shot dead by police.

Following the Halloween shooting, Colorado Springs resident Jessie Pocock organised a vigil with her fellow citizens, who expressed a mix of grief and outrage at the deaths. She feels that there is a “wild west mentality” when it comes to guns in Colorado Springs.

“It’s important that we can go to the grocery store and not be worried about someone randomly shooting us down on the streets, and right now that is not the case in Colorado Springs, said Pocock, who lives close to the abortion clinic. “You’re not safe on the streets here, and that is a problem.”

Colorado Springs’ year of violence began last January when a bomb detonated outside the local chapter of the NAACP. No one was harmed in the attack, but the incident put many in Colorado Springs on edge.

“I’m a little overwhelmed with the war zone that is my home,” says Pocock.