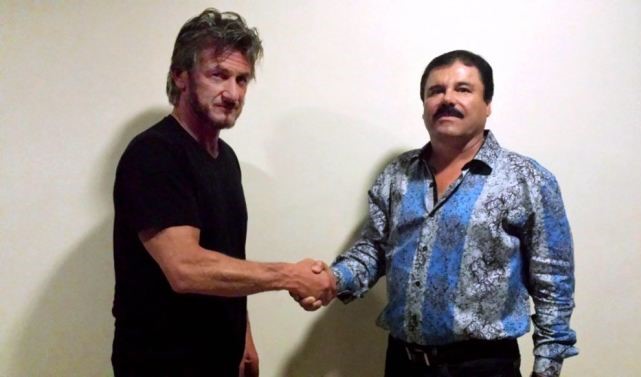 Bestselling novelist Don Winslow has written two epics about the Drug War: 2005’s The Power of The Dog and The Cartel, the latter of which was one of the best reviewed novels of 2015 and sold to Fox for a film that will be directed by Ridley Scott. Winslow has spent nearly 20 years researching the Mexican cartels, and the most of the violence in The Cartel is based on real events. He dedicated the book to the more than 100 journalists killed in cartel violence, and named every slain reporter in his intro. He agreed to write for Deadline why he was so appalled by Sean Penn’s El Chapo encounter and subsequent 60 Minutes interview.

As someone who has researched and written about the Mexican cartels and the futile ‘war on drugs’ for coming on twenty years, I know how tough a subject it is. Mind-bending, soul-warping, heartbreaking, it challenges your intellect, your beliefs, your faith in humanity and God. No journalist or writer who has ever tackled it has emerged quite the same – and all too many have not survived at all, but been tortured, mutilated and killed on the orders of such as Joaquin Guzman. (I resist the cute sobriquet of ‘Chapo.’ He is not one of the Seven Dwarfs – not Dopey, or Sneezy or Bashful. He’s a mass murderer.)

When I first heard that Penn had done an interview with Guzman, I was wondering what terms were demanded to grant that interview. Penn has a reputation of not shying away from controversy or hard, unpopular stances. I was hoping that he would ask Guzman questions that would matter.

Mr. Penn tells Charlie Rose that he considers the article a failure because it did not succeed in addressing his real issue – our policies of the ‘war on drugs.’ But in an article of 10,500 words, the phrase ‘war on drugs’ appears three times. It was not the purpose or focus of Penn’s horribly misguided piece.

Penn’s article had nothing to do with the forty year, trillion dollar failure that is the ‘war on drugs’ — it was instead a brutally simplistic and unfortunately sympathetic portrait of a mass murderer. Penn thought he had scored a journalistic coup – instead his interview was the by-product of Guzman’s infatuation with a soap-opera actress (Guzman didn’t even know who Penn was) and told the exact story that Guzman wanted – with line by line editorial approval courtesy of Penn and Rolling Stone.

Guzman was never called to answer the hard questions. That’s a shame, because these questions need answers.

I was hoping to hear Guzman explain why, after his first so-called ‘escape’ (I use single-quotes because the word ‘escape’ does not normally encompass the active complicity of one’s jailers and government) in 2001, he launched a campaign of conquest to take over rival cartels’ territories – a brutal war with a body count of over 100,000 lives.

In his article, Penn refers to Guzman’s “unguarded will to speak freely.” Well, I wish I had heard Guzman “speak freely” about the under-aged girls who were routinely brought to him in his luxurious prison ‘cell’ (as Francisco Goldman reported in his excellent New Yorker article, ‘El Chapo III – The Farce Awakens’); about the hit he ordered on rival cartel boss Rodolfo Carillo Fuentes that also killed Fuentes’ wife and launched yet another round of violence that killed thousands.

An entry-level journalist would have pushed Guzman on the many millions of dollars in bribes he has paid to co-opt police, judges and politicians, about his treaty with the sadistic and hideously violent Zetas when it was convenient to him. I would like to have heard about the people on his payroll who dissolved their victims’ bodies in acid, about the decapitations and mutilations, about the blood soaked bodies displayed in public places as intimidation and propaganda. I would like to have known, for instance, how Guzman feels about the 35 people (including 12 women) he had slaughtered because they were allegedly Zetas (this was when he was at war, not peace, with them) only to discover later that they were innocent.

Any thoughts about that, Mr. Guzman? Any feelings?

A reporter less concerned with ‘experiential journalism’ would have asked this “Robin Hood” about being a rat. Would have asked him whether it’s true that starting in 2000, when he was still in prison, Guzman, through his lawyers, gave information to the DEA about rivals. Or that it was a tip from Guzman in 2002 that led to the capture of his rival Benjamin Arellano Felix? Or asked him how he feels about betraying friends and partners to the police, as he did in 2008 when he turned on the Beltran-Leyva brothers, causing yet another ‘war’ that killed hundreds.

Those questions might have wiped the smile off Guzman’s face, which Penn reported he had for over seven hours during their interview.

Seven hours, and Guzman was not asked about the 17 unarmed people his gunmen slaughtered at a drug rehabilitation center in Ciudad Juarez, again on the suspicion that they were working for a rival cartel. Or, as Oscar Martinez has reported, about the kidnapping, forced labor, mass rape and murder of hundreds of Central American migrants.

Instead we were told by Penn that Guzman “only resorts to violence when he deems it advantageous to himself or his business interests.” I guess that makes it all right, then; and, of course, will be of great comfort to the families of his victims. You know, Guzman ‘needed’ to do it.

Incredibly, there were no questions asked about the murders of many Mexican journalists with their horrifically mutilated bodies left out in public like garbage.

Likewise, Penn failed to ask the hard questions about Guzman’s export of mass amounts of heroin, cocaine and methamphetamine to the United States and around the world. Instead, Guzman was allowed to brag about being the world’s biggest drug exporter (a claim his lawyers now deny that he made) without a moral challenge. Guzman and his Sinaloa Cartel partners are directly responsible for the heroin epidemic now causing a record number of overdose deaths in the United States.

But we learned that Guzman has no responsibility for these real-life consequences, because he grew up poor and had no choice, which is an insult to his own people and the many rural Mexicans who have gone on to lead useful, positive lives in which they didn’t kill thousands. Some of them are doctors who have treated his victims, others are nurses who have been murdered in emergency rooms, still others are journalists who gave their lives reporting the truths that this interview neglected.

Instead, we hear about how nice Guzman’s shirt is, how he comes across as a bashful teenager, that he loves his children (including, ostensibly, the son who was killed when he followed his father into the drug trade), that his children love him, that he provides “much needed services in the Sinaloa mountains, funding everything from food and roads to medical relief.”

This last bit is true, but let’s not stop there. Guzman and his cartel have also built clinics, churches and playgrounds. (It’s nice that kids have someplace to play when not being gunned down in cartel crossfires or orphaned in Guzman’s endless wars of ‘self-defense.’) But this tired rationalization of an impoverished youth and the justification of subsequent good deeds have been used by every murderous gangster since the beginning of time.

We learn that this “simple man from a simple place, surrounded by the simple affection of his sons to their father, and his toward them [pardon me while I go vomit] does not strike [Penn] as the big bad wolf of lore.”

By any objective standard, Joaquin Guzman Loera is an evil man who has caused untold suffering for others.

At some point in time, he will be asked to answer for this.

But not in the article that Penn wrote, and one of the most important issues is why Penn didn’t ask these questions. Penn was clearly so enamored of his subject and the article was further compromised by topics excluded under the agreement and questions that were never asked. Mr. Penn has said that Guzman didn’t request any changes. Why would he? He got to tell the story exactly the way he wanted to tell it.

And I’m shocked that Rolling Stone – fresh off the scandal from its UVA rape debacle – would give editorial approval to a mass murderer in exchange for an interview.

Penn’s story was not a failure because people failed to understand it, as he claimed on 60 Minutes. It is a failure because he failed to understand who he was interviewing, the crimes his subject committed and the responsibility he had to ask real questions. Penn’s failure is further compounded by his 60 Minutes interview, which was as misguided and self-serving as the Rolling Stone article.

I applaud Sean Penn for his important work in New Orleans and Haiti, but I condemn what he did here.

He should apologize and stop trying to explain it. Sometimes wrong is just wrong.