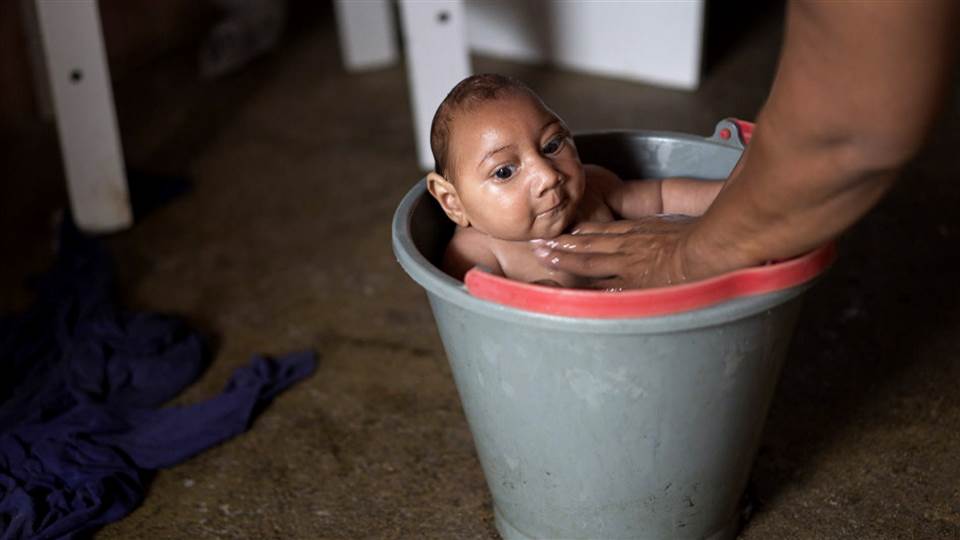 El Salvador battling a Zika virus epidemic asks women to wait until 2018 to get pregnant.

When in human history has an epidemic become so alarming that a nation feels compelled to urge its people not to have children for two years?

Grappling with a mosquito-borne virus linked to brain damage in infants, El Salvador is doing just that, advising all women in the country not to get pregnant until 2018 — the equivalent of a Hail Mary pass that, to many here, only illustrates their government’s desperation.

“It’s not up to the government, it’s up to God,” said Vanessa Iraheta, 30, who is seven months pregnant with her second child. “I don’t think the youth will stop having children.”

The virus, known as Zika, has rattled Latin America and the Caribbean, particularly Brazil, where more than 1 million people have been infected and nearly 4,000 children have been born with microcephaly, a rare condition in which babies have unusually small heads.

Other nations around the region have issued warnings similar to El Salvador’s, with officials in Colombia and Ecuador urging women to put off becoming pregnant for months, or until the dangers of the virus are better understood.

But El Salvador’s advice to stop having children for two full years struck many experts as particularly sweeping, leaving them to wonder when else a nation has tried to halt its birthrate in the face of an epidemic.

“I can tell you that I have never read, heard, or encountered a public request like that,” said David Bloom, a professor of economics and demography at the Harvard School of Public Health.

If El Salvador’s advice sounds like a cry for help, critics say, that’s because it is.

“I mean, the futility of saying something like this,” said Dr. Ernesto Selva Sutter, a leading public health expert in El Salvador, shaking his head. “Are you going to stop having sex?”

This small nation is already home to an epidemic of gang violence, pushing tens of thousands of its young people to flee north every year and stretching the government’s resources. By one estimate, El Salvador earned the unenviable title of being the Western Hemisphere’s most violent country.

Now the Zika virus is crashing through its doors. With at least 5,000 cases of Zika in a nation of 6 million, more than 1,500 in the last month alone, the government has been scrambling for solutions. It has dispatched teams of fumigators and treated water supplies to combat the Aedes mosquito, which also carries diseases like dengue, yellow fever and chikungunya.

Standing water, which allows the insects to breed, is a fact of life here, as are the pools of trash cloaking many city streets in the dense neighbourhoods that carve through the hillsides of the capital.

One community leader said that a government clinic in his neighbourhood shut down three months ago after repeated threats from the gangs, the kind of conditions that experts say make it harder to treat and combat the virus.

The country’s vice minister of health, Eduardo Espinoza, said that the recommendation to stop having children is not the government’s principal approach to the epidemic, but rather a “secondary” strategy stemming from “the fact that these mosquitoes exist and transmit this disease.”

“We see ourselves obligated to make this recommendation to partners trying to get pregnant,” he said.

The World Health Organization said it would not recommend suspending pregnancies for two years.

“There are many questions that need to be answered before making that recommendation,” said Dr. Marcos Espinal, the director of communicable diseases for the Pan American Health Organization.

One of the most important, he said, is whether the country is at the peak of its epidemic. “You have to assess the risk in making such a recommendation of how it will impact the birthrate of a country,” he said.

Other experts said that Zika had brought nations like El Salvador into uncharted territory.

“I have never seen or read of any instance of a government warning its citizens not to get pregnant,” said Dr. Howard Markel, who teaches the history of medicine at the University of Michigan.

Markel cited other medical warnings related to pregnancy: Pregnant women are cautioned by doctors to stay away from anyone with rubella, for instance, because it causes devastating birth defects, including microcephaly.

Early in the AIDS epidemic, when there was no treatment and mothers frequently passed HIV to their babies, he added, “there was some sotto voce debate about whether it was morally ethical for a doctor to advise a woman not to get pregnant because of the risk to her child.”

The government’s advice to postpone pregnancy for years is a delicate issue in this conservative, religious nation. It would require the ubiquitous use of contraception, which can be complicated in a country that is more than 50 percent Roman Catholic.

Espinoza, the vice health minister, said that the government had not held specific talks about its request for women to refrain from having children. It has, however, asked various religious leaders to press their congregations to clear standing water and clean up trash, as well as use repellent and take other precautionary measures.

“Even if the religious leaders can help us combat these mosquitoes, we still feel obliged to make this recommendation to the couples,” he said, referring to the advice to avoid getting pregnant.

Like the government, the Roman Catholic Church in El Salvador seems unprepared for a confrontation. The archbishop has yet to weigh in. Over the weekend, when many expected him to discuss the issue, he was sick and unable to say Sunday mass. The auxiliary bishop, Gregorio Rosa Chavez, indicated that there would be a meeting of bishops next week that might yield some answers.

“Certainly this is a new theme, and it has to be looked at calmly,” he said in an interview. “I think that the church is going to take this very seriously. I would just wait a little.”

Waiting does not appear to be a problem for some women. Unlike many developing nations, the birthrate in El Salvador is already low, and the fear of Zika infecting a child seemed to rank third or fourth on the list of reasons many women cited for why they did not want to get pregnant.

First, they say, is the violence. Gangs operate with impunity and the war between them, as well as with the police, has produced homicide levels not seen since the country’s civil war that ended in 1992.

Women also mentioned economic fears, with severe underemployment and more than a third of the population living under the poverty line.

“It’s not a question of this disease,” said Sara Galdamez, 21, accompanied by her 3-year-old daughter and husband. “Honestly, it’s a question of economics and, well, the state of security.”

Despite the church’s influence, contraception does not appear to be especially stigmatized in El Salvador. Data from the US government suggests that its use here is on par with the United States.