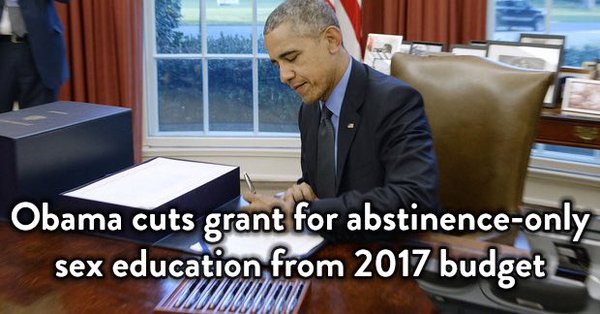 Obama cuts all funding for Christian-based ‘Abstinence Only’ sex-ed programs.

President Obama’s 2017 budget proposal has removed a $10 million annual grant that goes towards funding “abstinence-only” sexual education classes in public schools. By eliminating the grant, Obama would end the financial incentive for states to continue teaching the debunked sex-ed program.

“Abstinence Only” is a sex education course that refuses to teach about condoms or other forms of birth control in favor of encouraging teens to abstain. The outdated and ineffective curriculum is favored by many Christian sects, and is supported by many Republican lawmakers.

The program often skips information about anatomy, puberty, sexual health and orientation. In addition, it’s been theorized that the courses can create a hostile environment for same-sex couples, couples that have premarital sex, or other people who don’t fit in with the image of sexuality described in the class.

Jessica Boyer, CEO of The Sexuality Information and Education Council of the U.S. (SIECUS), said in a statement that she is “grateful for President Obama’s leadership in seeking to end abstinence-only-until-marriage funding once and for all.

After three decades and nearly $2 billion in federal spending wasted on this failed approach, the President’s proposed budget increases support for programs and efforts that seek to equip young people with the skills they need to ensure their lifelong sexual health and well-being.

Congress has until October 1, the end of the fiscal year, to debate the budget. With Obama entering the final year of his presidency, the Republican Congress is sure to fight him on nearly every platform.