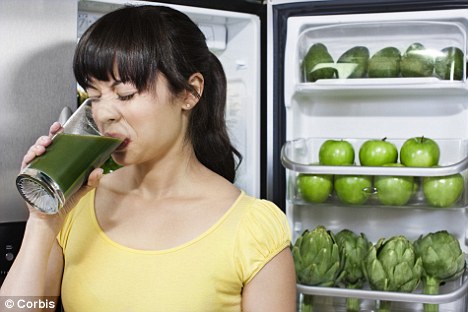 Juicing Is Bad for You and the Earth.

Pulverizing food until all the nutrients have been squeezed out is a dangerous fad. There’s a reason we’ve been cooking what we eat for several thousand years.

There’s a reason your mother told you to eat your vegetables, not juice them.

But no one seems to be listening these days. According to IBIS World, the market for juices and smoothies is $2 billion annually and expected to grow by hundreds of millions of dollars over the next few years. You can scarcely go a week without hearing about a coworker or celebrity being on a “juice cleanse,” either.

Juicing is not just another fad though: it is a privileged, wasteful form of food consumption that’s worse for you than cooking and bad for the environment; juicing is the triumph of marketing over science.

When juiced, a basket of fruit would probably serve half—if not less—the amount of people as it would if eaten whole. Lost to juicing are fibers that satiate (including the skin which is loaded with heart-healthy, cancer-fighting flavonoids), vitamins, and most importantly, fat. Fat matters because the body needs it to absorb a whole host of vitamins like A, D, E, and K (PDF). Without fat in that juice combo, those vitamins pass right through you.

That sounds sort of like a “cleanse,” but what is being cleansed from the body to begin with? After all, the liver is the body’s own cleanser and it is so powerful it can repair itself in less than 24 hours under normal conditions.

Juicing fruits or vegetables high in sugar (like beets instead of leafy greens), can raise blood-sugar levels as much as drinking a can of Coca-Cola. That’s because fruit sugars (fructose) are consumed without fiber to control how fast they’re absorbed.

There’s a reason humans cook food instead of pulverizing and drinking it: we get more calories and nutrients.

Boiling, steaming, and frying foods unlocks antioxidants, phytochemicals like lycopene and specific vitamins for the body to digest, according to a 2007 study in the Journal of Agricultural and Food Chemistry. As Rui Hai Liu, a professor of food science at Cornell University put it in 2009, “the heat from cooking breaks down a plants’ thick cell walls and aids the body’s uptake of some nutrients that are bound to those cell walls.”

Think of cooking as a second, third, or fourth stomach like those inside cows, sheep, and goats who use each one to break down food. Moose spend their days chewing, swallowing, and digesting. Humans spend only a fraction of time eating compared to other animals because we learned how to break down food before eating it with heat and fermentation.

Juicing might even be worse for the environment than it is for you.

After the juice has been squeezed out of food, tons of pulp is left behind, thrown into landfills where they emit significant amounts of methane, a greenhouse gas 21 times more potent than carbon dioxide. Only two U.S. cities, San Francisco and Seattle, have a required composting program that would prevent pulp from going directly into a landfill.

As always, mom was right: eat your veggies, just cook them first.