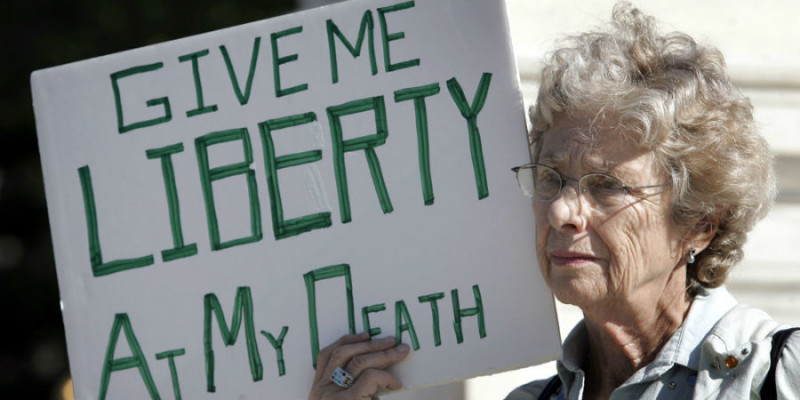 But no one knew when the law would take effect, because of the unusual way in which the law was passed — in a legislative “extraordinary session” called by Brown. The bill could not go into effect until 90 days after that session adjourned.

The session closed Thursday, which means the End of Life Option Act will go into effect June 9.

“We’re glad to finally have arrived at this day where we have a date certain,” says Sen. Bill Monning, D-Carmel.

“It’s a historic achievement for California, and for a limited universe of people dealing with a terminal illness,” Monning says. “It could indeed be a transformative way of giving them the option of a compassionate end-of-life process.”

Disability-rights advocates fought hard last year against passage of the legislative act, and they continue to voice concern.

Marilyn Golden, senior policy analyst with the Disability Rights Education & Defense Fund, says it would be impossible to know, for example, if a depressed patient went to many doctors — who all denied the request for lethal medication — before finding one who agreed to write the prescription.

“We are looking ahead at measures to protect people from abuse,” Golden says, “and to explore and inform doctors, nurses and pharmacists that they don’t have to participate.”

As written, the law requires two doctors to agree, before prescribing the drugs, that a patient has six months or less to live. Patients must be able to swallow the medication themselves and must affirm in writing, 48 hours before taking the medication, that they will do so.

California is the fifth state to permit this option at the end of life. It joins Vermont, Oregon, Washington and Montana.

Across the state, some patients with advanced cancer welcomed the news.

“It gives me a great peace of mind to know that I will not be forced to die slowly and painfully,” says Elizabeth Wallner, in a release from Compassion & Choices, an aid-in-dying advocacy group. Wallner, 52, of Sacramento, is a single mother with stage 4 colon cancer that has spread to her liver and lungs.

“It gives great comfort to know that the agonizingly traumatic image of me suffering will not be my family’s last memory of me,” she says.

Monning says he’s grateful to people who worked for passage of the law, some in their final days:

“I really believe,” Monning says, “we use today to mark and dedicate the memory of some true champions.”