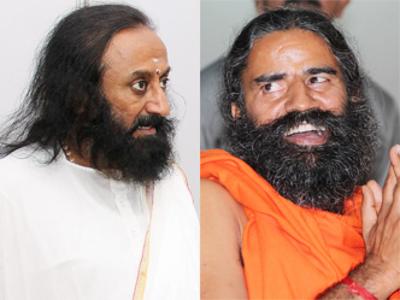 The Pathology of New Age Cults.

The need to ease out the influence of New Age gurus is more immediate than ever. Otherwise, the stranglehold of religious cults on governments would become a reality sooner than later.

In March 2001, I wrote a piece in a national daily I used to then work for arguing that there was no essential difference between the Taliban’s felling of the Bamiyan Buddha and the destruction of the Babri masjid in India. For every Mullah Muhammad Omar in Afghanistan, there is a corresponding Giriraj Kishore.

Soon after the piece was published, I received a request from Sri Sri Ravi Shankar through a disciple for a conversation on this very issue. I was told that the popular New Age guru was upset and perplexed by my speaking of the Bamiyan Buddha and the Babri masjid in the same breath.

I met him in Delhi and we spoke for nearly an hour (all through which Sri Sri ran his fingers in a large bowl of dry fruit, neither eating any nor offering it to me). There was total asymmetry between our perspectives and we agreed to disagree. I failed to impress upon him that slavery to historical memory can lead to a spiral of recriminations and fuel the desire to settle scores endlessly. Both acts, contemporary as they are, are born out of cynical politics and the desire to divide people and rule on the basis of such a division.

The godman kept repeating the fact that the mosque in Ayodhya was built after destroying a temple and so it fell into another category than the Bamiyan Buddha. For me the impulse to destroy the Bamiyan Buddha and the Babri mosque came from the same seed of intolerance and fear of diversity and complexity with little or no difference separating the two.

Of course, there has been a proliferation of new age Hindu gurus in recent years, where the tag of “new age” manages to camouflage their otherwise apparent sectarian identities. They manage to hide behind the indeterminate label of “world religions” and this label releases them from immediate identification with any narrow sectarian affiliation. Their stress on singing, dancing and being happy, and doctrinal fast food such as “smiling” and “love” endears them to the burgeoning “I, me, myself” middle class in India, especially the young. This escape from any serious doctrinal discussion helps justify and legitimate hedonism and mindless consumerism. They help concretise a world where guilt is someone else’s bad karma and good karma is the pursuit of unbridled gratification, including the misplaced greed for spirituality.

These new age gurus offer to Hindus a simplified, non- threatening and pre-digested doctrine that is founded on a peculiar kind of interpretation of advaita Vedanta, made popular in India since the nineteenth century. This is akin to an overripe banana that looks solid from the outside but is essentially gooey from the inside. It takes the form of endless prattle about the oneness of the universe and the universality of the Brahman. Add to this yoga, meditation and ayurveda and the picture gets completed. The latter are touted as part of the great eternal and abiding legacy of their version of the great Hindu civilisation and their popularity elsewhere helps integration with Western modernity and concepts of progress.

More significantly, almost all of these new age cults and gurus are recruitment centres for the Rashtriya Swayamsevak Sangh and the Sangh parivar. Put differently, the RSS has outsourced its putative recruitment to these new age cults. The RSS and the Sangh parivar realise that no amount of sartorial changes will help correct their regressive image. What the new age cults manage for them is to keep the Indian middle class within the Hindu nationalist fold by echoing the preoccupations of this class. Therefore, these cults also have a subtle way of speaking about India’s military glory, how true gentleness lies in strength, the dream of India as a superpower, the impediments in the way of economic growth (namely, communists, secularists and Muslims) and how missionaries, alternate lifestyles, heterodox ideas, creative literature, poetry and modern art have worked to tarnish India (which is Hindu in their scheme of things) and its glories in the eyes of the world.

Equally serious are the banalities offered day in and day out. The more popular among these are “the same god is in all of us” and the “same essence permeates us all”. In that sense, they reduce all other faiths and their followers to nothingness and rob them of any specific cultural identity they might have cherished, besides being extremely condescending to other faiths. In all of this, the new age gurus manage to impress upon their followers that this benign doctrine flows from Hinduism and that its customary tolerance is what accounts for this seeming generosity.

The only counter to these pernicious doctrines is the celebration of politics, democracy, liberalism and plurality in letter and in spirit. Genuine democracy is the greatest enemy of these regressive tendencies. The way politicians have vitiated the public sphere in recent years leads to the spectacle of a godman entering the public arena to solve an issue that is primarily political. Whether this is done in a public capacity or in a private one is an issue that ought to be thoroughly debated and any such future efforts ought to be shunned. Neither the Shankaracharya nor new age gurus have any business to meddle in political issues. They neither have the legitimacy nor the authority. They are not part of the formal political process and are to be kept out of the public realm. Of course, godmen too are citizens of this country but they no longer are sole representatives of their faiths. Hence, to ask the Kanchi Acharya to negotiate a settlement of the Babri masjid-Ram mandir dispute is patently unfair to those Hindus who do not look up to him as their spiritual leader.

New age gurus represent an even smaller, though powerful, number of people, who are ensconced in their pretty enclaves with little to do with the rest of India. The  need to ease out their influence cults is more immediate than ever. Otherwise, there will be a repeat of Gujarat elsewhere and the stranglehold of religious cults on governments would become a reality sooner than later.

There is much to do in India and godmen can lend a helping hand. Most of them do so, but restrict it largely to indoctrinating future generations of young men and women to be less Indian and more Hindu, Muslim or Christian. There is no one art of living, but there is a staggering plurality of ways in which we might live. The most ordinary Indian instinctively understands this as long as he doesn’t fall prey to divisive ideologies or restrictive cults. One of these many ways of living and living well is to revel in the noise and chaos of democracy, as spiritual and as sacred for some of us as a holy text, a godman, or even a pilgrimage.

Jyotirmaya Sharma teaches politics at the University of Hyderabad and is the author of Hindutva: Exploring the Idea of Hindu Nationalism and, most recently, Cosmic Love and Human Apathy: Swami Vivekananda’s Restatement of Religion.