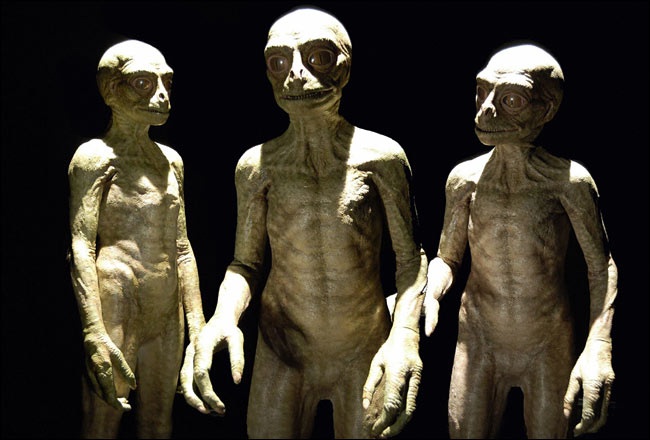 According to a Public Policy Polling survey, around 12 million people in the US believe that interstellar lizards in people suits rule our country. We imported that particular belief from across the pond, where professional conspiracy theorist David Icke has long maintained that the Queen of England is a blood-drinking, shape-shifting alien.

Conspiracy theories in general are not necessary bad, according to psychologists who study them. “If we were all completely trusting, it would not be good for survival,” explains Rob Brotherton, an academic psychologist and author of Suspicious Minds: Why We Believe Conspiracy Theories. “Sometimes people really don’t have our best interests in mind.”

But when people leap from thinking their boss is trying to undermine them to believing their boss might be a secret lizard person, they probably cross from what psychologists refer to as “prudent paranoia” into illogical territory.

And there are a lot of illogical ideas to pick from. Around 66 million Americans believe that aliens landed at Roswell, New Mexico; around 22 million people believe that the government faked the moon landing; and around 160 million believe that there is a conspiracy surrounding the assassination of former US president John F Kennedy.

While aliens and fake moon landings probably trigger eyerolls in many of us, defining what constitutes a conspiracy theory is difficult, Brotherton says. The government, for example, does sometimes conspire to do the unspeakable, such as the infamous 1930s Tuskegee study, initiated by the US government to examine untreated syphilis in African-American men. Researchers blocked research participants from receiving penicillin or exiting the experiment to get treatment. The study continued until a media report made it public. In this case, believing that the government was conspiring to keep people sick would have been completely accurate.

Chances are, we all know someone who believes some version of a conspiracy theory, which is why psychologists have been trying to understand what makes someone jump from logically questioning the world to looking for signs of lizard teeth in public figures. Research has shown that feelings of powerlessness and uncertainty are associated with a tendency to believe in conspiracies, says Karen Douglas, professor of social psychology at the University of Kent in the UK. Or as Joseph E Uscinski, associate professor of political science at the University of Miami and author of American Conspiracy Theories, puts it, “conspiracies are for losers”.

Conspiracies are for losers … people who are out of power use them to strategically close ranks, to salve their wounds

“I don’t mean it in the pejorative sense, but people who are out of power use conspiracy theories to strategically alert their side to danger, to close ranks, to salve their wounds,” Uscinski explains. “Think any election, the morning after, half the country says the election was rigged and the other half is happy.”

The most widely appealing conspiracy theories are the ones that allow a person to insert their own villain of choice, Uscinski says. For example, conspiracy theories around the assassination of JFK are so popular in part because they allow believers to blame the coverup on whichever power they most fear: the US government and associated agencies like the CIA or the former Soviet Union and Cuba.

Most conspiracy theories come and go, Uscinski says, and it is hard to get more than 25% of the population to believe in a particular one. There is a natural ceiling to the number of people who will buy into any one particular conspiracy theory, says Uscinski, who points to those that emerged after the death of US supreme court Justice Antonin Scalia – which were a “flash in the pan” and quickly disappeared as people moved on to the “next thing”.

But once someone believes a conspiracy theory, dissuading him or her of it is an uphill battle. That’s because belief in a conspiracy is not based on facts and logic, Brotherton explains. Something as straightforward, for example, as pointing out the lack of evidence for a conspiracy theory would only reinforce the belief that the evidence for it was suppressed. Getting someone to let go of a favorite conspiracy theory is like convincing a Republican to become a Democrat and vice versa, Uscinski says.

“We like to believe we objectively scrutinize information and come to reasonable beliefs,” Brotherton says, but in reality we have “all kinds of biases built into our brains”.

He cites a study in which researchers recruited a group of people who believed in JFK assassination conspiracy theories and a group who doubted the theories. Both groups were given a packet of purposefully ambiguous information.

“If everyone was rational, the information would moderate their beliefs,” Brotherton explains, and those who were sure of a conspiracy would start to doubt it, while those who were sure there was no conspiracy would also question their stance. “The opposite happened: people picked and chose the information they wanted to believe and everyone became more sure of their initial beliefs.”

While most conspiracies tend to gain traction in a very small number of people, when someone acts on a conspiracy, it can become dangerous very quickly. Cliven Bundy’s followers have tended to believe in everything from the government secretly microchipping millennials to the United Nations running the Bureau of Land Management. People who believe that the mass shooting in Sandy Hook, Connecticut, was faked have harassed the families of children that were killed.
Douglas and her colleague Dan Jolley, have studied the social consequences to contemporary conspiracy theories. They have examined the impact of believing in government conspiracy theories, in climate change conspiracy theories and anti-vaccine conspiracy theories. The findings were troublesome, says
Douglas.

In one experiment, researchers took two groups of participants and gave one group an article about anti-vaccine conspiracy theories, such as the idea that pharmaceutical companies fake the safety and efficacy data for inoculations because the shots make so much money. The other group did not read the article. All the participants were then asked to think about being a parent of a three-year-old and asked if they would vaccinate the child against a fictional disease. The participants who had read the anti-vaccine conspiracy literature showed they were less likely to intend to have the child inoculated.

In the US, those findings are playing out in places like California, which saw an outbreak of measles in 2014 in areas where children were not routinely vaccinated. It’s understandable why people are drawn to anti-vaccine conspiracy theories, Brotherton says. When people are dealing with some of the most important choices in their lives, like how to raise their children, and something unsettling happens, “your brain will reach for explanations, for a sense of order”. A person under those circumstances is not likely to critically evaluate the evidence presented, and the internet “is full of people that are convinced that vaccines are bad”.