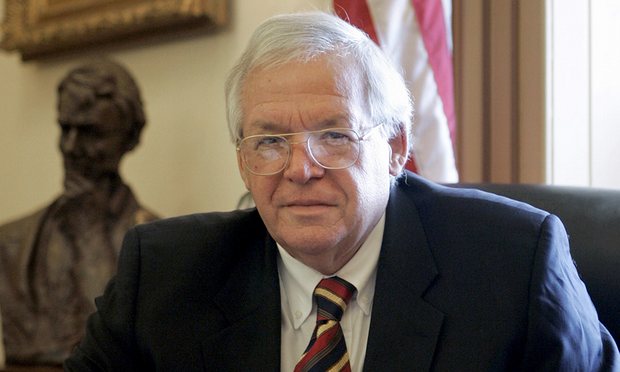 n his 2004 memoir, former U.S. House Speaker Dennis Hastert claimed he was never a good liar. “Maybe I wasn’t smart enough,” Hastert wrote. “I could never get away with it, so I made up my mind as a kid to tell the truth and pay the consequences.”

It took nearly 40 years, but in a packed Chicago courtroom on Wednesday, Hastert finally, reluctantly, admitted to his dark past.

In a raspy voice, Hastert, once the third most powerful elected leader in the country, acknowledged he sexually abused several boys he coached on the Yorkville High School wrestling team in the 1960s and 1970s.

Moments later, Hastert, 74, learned the consequences for his decades of dishonesty when a federal judge sentenced him to 15 months in prison.

In handing down the sentence, U.S. District Judge Thomas M. Durkin repeatedly slammed Hastert as a “serial child molester” who not only violated the trust of the boys he’d coached but also tried to mislead federal authorities years later by claiming he was being blackmailed by one of his victims.

“Nothing is more stunning than having the words ‘serial child molester’ and ‘speaker of the House’ in the same sentence,” Durkin said.

Hastert, dressed in a dark gray suit and appearing much thinner than his last court appearance in October, showed no outward reaction to the sentence, which was more than twice the high end of what prosecutors had sought. As spectators filed from the courtroom, Hastert remained motionless, not speaking to anyone. He was seated in a wheelchair and outfitted with a leg brace due to recent health issues.

The two-hour sentencing hearing capped a stunning downfall for Hastert, who rose from humble beginnings as a schoolteacher and coach to become the longest-serving Republican House speaker in U.S. history, a powerhouse in Illinois politics who was revered in the small town of Kendall County he called home.

Dozens of reporters and spectators lined up to get a seat in Durkin’s 14th-floor courtroom, where two of Hastert’s accusers came forward to testify for the first time about his sexual misconduct.

Scott Cross, previously identified in court papers only as Individual D, went public with his account of how Hastert had sexually molested him in an otherwise empty locker room one afternoon in fall 1979 when he was a 17-year-old senior. Cross’ brother, Tom, a former longtime Illinois Republican House leader, had been a Hastert protege.

Also testifying was Jolene Burdge, who recalled in poignant detail how her brother, Stephen Reinboldt, had spent years “running from the pain and turmoil” Hastert’s abuse had caused, afraid to speak out about it because he thought no one would believe him. When she had confronted Hastert about the abuse at her brother’s funeral in 1995, he treated her like an “insignificant annoyance,” she said.

“Now I stand here 20 years later with the truth on my side,” said Burdge, turning and looking directly at Hastert, who did not meet her gaze. “I hope I have been your worst nightmare.”

Hastert, who his lawyers said nearly died last year from a blood infection, sat in the wheelchair without expression for nearly the entire hearing, his mouth turned down and eyes only occasionally glancing across the room. When it came time for him to speak, he shook as he was helped to his feet by his attorneys and leaned heavily on a walker to approach the lectern at the front of the hushed courtroom.

Looking through eyeglasses at his written notes, the white-haired Hastert apologized for mistreating some of his athletes, but as in past apologies conveyed through his attorneys, he didn’t specify what it was he’d done.

Where will Hastert serve his sentence?

“For 11 months, I have been struggling to come to terms with events that occurred almost four decades ago,” Hastert said. “I wanted to apologize for the boys I mistreated when I was their coach. What I did was wrong, and I regret it. They looked to me, and I took advantage of them.”

After apologizing to his family, supporters, constituents and the government, Hastert wrapped up his remarks by thanking Durkin for listening. But the judge didn’t let him off the hook. As Hastert gathered his papers and moved to take a seat, Durkin said he had a few questions of his own.

“You said you mistreated athletes. Did you sexually abuse Mr. Cross?” Durkin asked.

“I — I don’t remember doing that, but I accept his statement,” Hastert said.

“Did you sexually abuse Victim B?” asked Durkin, referring to another former wrestler who accused Hastert of performing a sex act on him when he was 14.

“Alright. And how about Mr. Reinboldt? Did you sexually abuse him?” the judge asked.

After Hastert replied, “That was a different situation,” Durkin said, “If you want to elaborate, now is the time to do it.”

Hastert conferred with his lawyer.

“I — I would accept Ms. Burdge’s statement,” he then said haltingly.

“So you did sexually abuse him?” Durkin asked.

Hastert pleaded guilty in October to one count of illegally structuring $950,000 in bank withdrawals to avoid reporting requirements. He admitted in a plea agreement with prosecutors he was making the withdrawals to pay a longtime acquaintance — identified in court records only as Individual A — to hide wrongdoing from his past.

The case against Hastert began to unfold four years ago after a Yorkville bank noticed the suspicious withdrawals. After he was told by bank officials that any withdrawals of $10,000 or more had to be reported to regulators, Hastert began to withdraw cash in $9,000 increments. In all, Hastert took out $1.7 million over 4 1/2 years, paying Individual A in increments of $50,000 or $100,000 in meetings held at a Yorkville restaurant parking lot, prosecutors said.

In December 2014, FBI agents confronted Hastert about the withdrawals at his home in Plano. Hastert told them he was simply trying to keep his money safe, but shortly after that meeting, an attorney representing Hastert called authorities to say the former speaker was a victim of an extortion plot and would cooperate in the investigation.

Hastert claimed in a February 2015 meeting with federal prosecutors that Individual A had falsely accused him of inappropriately touching him decades ago when he was a coach. At the request of authorities, Hastert secretly recorded two calls to Individual A to try to catch him making extortionist threats, but agents soon realized it was Hastert who appeared to be lying.

Highlights of what was said at Dennis Hastert’s sentencing

Agents then decided to question Individual A, who told them about the alleged abuse. He said Hastert had him stay in a motel room overnight with him while returning from a wrestling camp. Individual A had complained about a groin pull, so Hastert said he wanted to check it out and began massaging his groin area after telling him to remove his underwear, prosecutors said.

In all, five former students had come forward to accuse Hastert of sexual abuse. The incidents occurred in empty locker rooms and in motel rooms on summer wrestling trips, often predicated by Hastert offering a massage, according to prosecutors. His victims also told authorities how Hastert would pull up a reclining chair after practices and watch the boys shower.

In asking for probation, Hastert’s lead lawyer, Thomas C. Green of Washington, said Wednesday that Hastert was not attempting to minimize his conduct but wanted the judge to consider the entire arc of Hastert’s life in fashioning a sentence.

Hastert made poor decisions after being confronted by the FBI, retreating to “survival instinct,” Green said. He couldn’t admit his past wrongdoing to himself let alone to prosecutors or victims, he said.

Hastert’s name has been removed from public buildings and his portrait at the U.S. Capitol sent to storage. Green also said he’s been abandoned by many of his friends, some of whom asked that their letters of support be pulled after details of Hastert’s sex abuse crimes were revealed.

Green said Hastert now finds himself sitting alone at home, unable to care for himself and “isolated from society.”

Assistant U.S. Attorney Steven Block, meanwhile, requested a sentence within the range called for under sentencing guidelines — from probation to up to six months behind bars.

Speaking to reporters in the courthouse lobby, U.S. Attorney Zachary Fardon said he was satisfied with the sentence but wished Hastert would have been held responsible for the sexual abuse when it happened decades ago.

“I am frustrated,” Fardon said. “I wish Mr. Hastert would have been called to the carpet in 1968. We all would have been better off today. This isn’t perfect, but it’s what we got.”

Fardon also said he hoped their example would encourage any other potential victims of Hastert’s misconduct to come forward.

In his lengthy remarks, the judge ripped Hastert’s attempts to blame Individual A as “unconscionable.” His lies led the FBI to open an extortion investigation against Individual A, including pulling his bank records, tapping his phone and conducting surveillance on his activities.

“You tried to set him up,” Durkin said. “You tried to frame him …The full weight of the federal government’s investigative resources were thrown at him. And he didn’t deserve it — he was a victim decades ago and you tried to make him a victim again.”

Durkin’s voice choked with emotion as he talked about the trust parents put in teachers and coaches to do right by their children, and how the parents of Hastert’s victims have been left to agonize over how they missed the warning signs. The judge also noted that Hastert took advantage of the desire of many teens to simply fit in and avoid embarrassment in front of their peers.

“Can you imagine the whispers, the finger-pointing, the sideways glances if you’re a 14-year-old boy and you accuse the town hero of molesting you?” Durkin asked.

Throughout the judge’s remarks, Hastert sat in his wheelchair without expression, glasses low on his nose. At one point, as Durkin made it clear that probation was not in the cards, Hastert clasped his hands in front of his face and dropped his eyes.

In her remarks, Burdge talked about how her brother’s life deteriorated after Hastert abused him in high school, the trauma leading him “down a path of high-risk, reckless behavior that ultimately cost him his life.”

Stricken with AIDS, Reinboldt spent his last years wallowing in depression, living in a one-room apartment in Los Angeles, she said. When he died, fear over the AIDS epidemic was rampant, and only one funeral home would come to pick up his body “in the cover of night,” she said.

“You took his life, Mr. Hastert, not because he died of AIDS, but because you took his innocence and turned it against him,” she said. “He was too young and vulnerable to understand that.”

In commending the victims in coming forward, Durkin told Burdge she could rest assured that people finally believed her.

Sitting in the courtroom gallery, Burdge nodded, smiled sadly and whispered, “Thank you.”