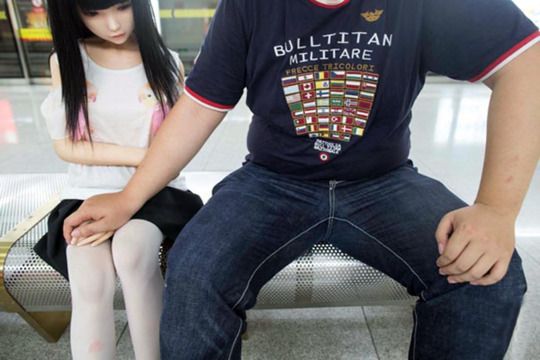 Lonely Men In China Are Having Relationships With Life-Sized Dolls.

An increasing number of singletons in China are choosing to opt for silicone over flesh as they enter into loving relationships with life-sized dolls.

With over 50 kinds of realistic dolls now on the market, the realistic toys differ depending on what the customer is looking for – different figures, eye and hair colours, and even different skin textures.

Buyers of the dolls are predominately male and some have even fallen in love with their dolls, giving them names, personalities and “souls” to match.

Relationships: Men are treating their dolls like humans (CEN)

Love: Song Bo treats his doll as if she was his daughter (CEN)

Not everyone uses them as a girlfriend, however – Song Bo, one of China’s most well-known doll enthusiasts from Beijing, bought his after being diagnosed with a cyst in his head.

He claimed he did not want to risk marriage or having children, and instead now keeps the doll as a daughter.

Song can often be seen spending time with his ‘child’ – who cost over £1,500 – in parks and riding trains on the underground in his hometown.

Zhang Fan, 36, who works as a stock broker in the Chinese capital, is another doll owner who claims his plastic friend is not just a toy or any random woman, but is in fact the female version of himself.