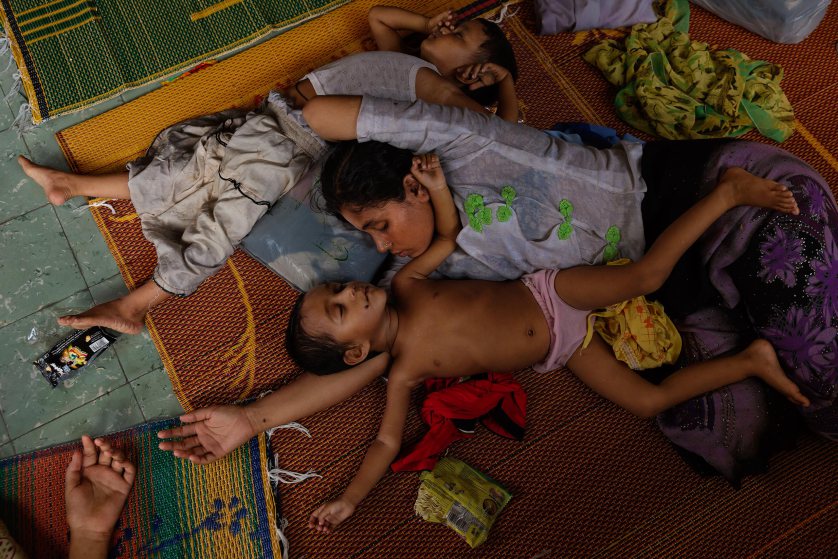 Despite the U.S.-led rolling back of economic sanctions and internationally backed national elections taking place early next month, more than a million people in Burma are facing state-sponsored genocide, according to a new report.

The Rohingya Muslim community of the military-dominated Southeast Asian nation, which is now officially known as Myanmar, has been systematically persecuted and expunged from the national narrative — often at the behest of powerful extremist groups from the country’s majority Buddhist population and even government authorities — to the point where complete extermination is a possibility, according to a damning new study by the International State Crime Initiative (ISCI) at the Queen Mary University of London.

“The Rohingya face the final stages of genocide,” concludes the report.

ISCI uses noted genocide expert Daniel Feierstein’s framework of the six stages of genocide, outlined in his 2014 book Genocide as Social Practice, as a lens through which to view Burma. Through interviews with stakeholders on both sides of what it describes as ethnic cleansing, as well as media reports and leaked government documents, the report enumerates how the Rohingya have undergone the first four stages — stigmatization and dehumanization; harassment, violence and terror; isolation and segregation; systematic weakening — and are on the verge of “mass annihilation.” The sixth stage, which involves the “removal of the victim group from collective history,” is already under way in many respects, the report says.

Stricken from Burma’s 135 officially recognized ethnicities in 1982, the Rohingya have undergone decades of discrimination and disenfranchisement, albeit never to the degree they currently face. The Burmese government’s official position is that the Rohingya are interlopers from neighboring Bangladesh, despite many having lived in the country for generations, and it refuses to even acknowledge their collective name, preferring the loaded term “Bengali.” The report documents a systematic deterioration of the Rohingya’s situation since communal violence broke out in June 2012 in Burma’s Rakhine (formerly Arakan) state.

Although the Burmese government has painted the strife — which saw hundreds of people, mainly Muslims, slaughtered during two main waves of violence that June and October — as a spontaneous outbreak of long-mounting religious tensions following the reported rape of a Buddhist woman, the ISCI report presents compelling evidence that the attacks were premeditated and possibly even organized by local authorities.

Interviews with some of the perpetrators — none of whom have been prosecuted because of a supposed lack of concrete evidence — reveal that they were bused into Rakhine state’s capital city Sittwe from nearby villages, provided two free meals a day and told it was their “duty as Rakhine to participate in an attack on the Muslim population.”

There are also strong indications that the government not only allowed the violence to take place unabated for almost a week, but that police, military and other state security forces participated in the attacks themselves, the report says.

Since then, close to 140,000 Rohingya have been sequestered in squalid camps outside the state’s capital, heavily guarded and prevented from leaving by security forces. The 4,500 that remain in Sittwe reside in a run-down ghetto with similar restrictions on movement. A majority of the Rohingya, numbering about 800,000, are spread out across two townships in northern Rakhine state — another region completely blocked off from the outside world by the military.

A lot of the food rations sent by international aid organizations never make it to the Rohingya camps, and denial of access to adequate health care have turned them into hotbeds for malnutrition and disease. As a result of the apartheid-like conditions, the inhabitants of these camps are also largely prevented from receiving an education and earning any sort of livelihood.

“The abuses that the Rohingya are experiencing are at a level and scale that we have not seen elsewhere in Southeast Asia,” Matthew Smith, the founder and executive director of Bangkok-based nonprofit Fortify Rights, tells TIME. The human-rights organization has been documenting abuses in Burma, and Smith echoes the assertion that there is a strong reason to believe state-enabled ethnic cleansing is taking place in the country.

“The Rohingya don’t have to be annihilated for someone to be held responsible for the crime of genocide,” he says. “They [Burmese authorities] are creating conditions of life for over a million people that are designed to be destructive.”

The Plight of the Rohingya by James Nachtwey

James Nachtwey for TIME
Children rest at a refugee camp in Bayeun, outside of Langsa, Indonesia, May 20. They were among the 25,000-plus Rohingya Muslim migrants who have fled reported persecution in Burma and Bangladesh this year by crossing the Indian Ocean in search of refugee status in Indonesia and Malaysia.
1 of 12

There are more than just physical aspects to the Rohingya’s plight — they have been stripped of their citizenship, with their children no longer being issued birth certificates and laws restricting their marriage and birth rate. The government also excluded the community from the 2014 census unless they registered as “Bengali.”

They have also been denied the right to participate in the upcoming Nov. 8 general elections, a complete reversal from the last election in 2010 when Rohingya voted in large numbers and some were elected to the legislature, as the military-backed government yoked their animosity to the Rakhine to see of the challenge of ethnic parties aligned with the latter.

No political party has countered the Islamophobic national narrative, with even the liberal National League for Democracy (NLD) of Nobel laureate Aung San Suu Kyi going to the polls without a single Muslim candidate, and the Rohingya’s deplorable situation will likely endure no matter the election’s result.

“There will be no change for the Rohingya,” says Shwe Maung, a Rohingya lawmaker from northern Rakhine state who has been barred from re-election. “The government is totally denying our community, totally denying our ethnicity,” he tells TIME. “Whatever is happening is with the ultimate objective of genocide or cleansing, which is to finish these people … and to drive them out.”

In the absence of a light at the end of the tunnel, there is a growing likelihood that Rohingya will take to the seas en masse in order to flee their country — like thousands did earlier this year — in the coming months, falling pray to people-smugglers with often deadly consequences.

The previous exodus, which reached its height this June, was not only enabled and encouraged but also enforced by government authorities, interviews conducted by al-Jazeera for its new documentary Genocide Agenda reveal.

“They said, ‘You are Muslim and you are not allowed to live in Rakhine state. Get on the boat and flee wherever you want,’” an elderly Rohingya man says, recounting the presence of members of Burma’s security forces, army and police who forced them into the vessels. When his elder brother tried to resist, Rakhine Buddhists hacked him to death with a sword on the spot, he tells al-Jazeera before breaking down in tears.

The documentary, released on Monday, is the culmination of a yearlong investigation by al-Jazeera and contains stark evidence of government intent to, at the very least, promote an anti-Muslim sentiment among the Burmese population. Classified government documents obtained by the news channel’s investigative unit warn of “countrywide communal violence between Muslims and Burmans” being planned at a mosque in Burma’s capital, Rangoon, (violence that ultimately did not take place), and a presentation given to new army recruits contains sections on the “Fear of Extinction of Race” detailing how “Bengali Muslims … infiltrate the people to propagate the religion” and aim to increase their population and wipe out the Burmese Buddhists.

The film’s findings, as well as Fortify Rights’ research, were also the subject of an eight-month analysis by the Lowenstein Clinic at Yale Law School. The clinic examined the Rohingya’s circumstances according to the 1948 International Convention on the Prevention and Punishment of the Crime of Genocide and precedents set by international law, and concluded that “strong evidence” exists to substantiate the claim that genocide is being carried out in Burma with intent to destroy the Rohingya.

The clinic’s report, released on Thursday, calls for a commission of inquiry by the U.N. Human Rights Council to conduct an “urgent, comprehensive and independent investigation” into alleged genocidal acts perpetrated against the Rohingya.

Neither TIME nor al-Jazeera was able to obtain a response to the allegations from the Burmese government despite repeated attempts, though Deputy Information Minister Ye Htut told us last year: “We never pay attention to organizations such as Fortify Rights, which are openly lobby groups for the Bengalis.”

Such attitudes do not bode well for the Rohingya, whose plight is grimly summed up by a woman living in one of the camps interviewed by ISCI.

“If the international community can’t help us, please drop a bomb on us and kill all of us,” she says.