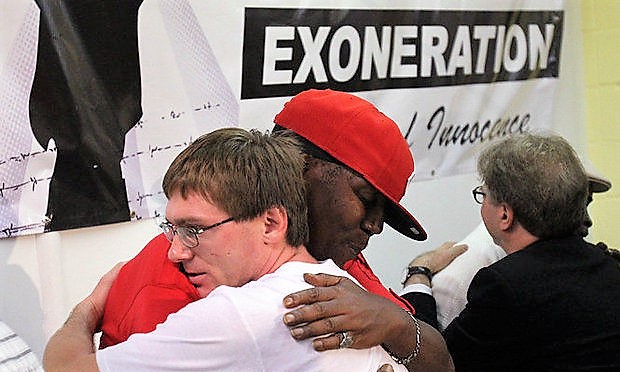 After spending years on death row in American jails, Ron Keine, Shujaa Graham, Greg Wilhoit and Albert Burrell were reborn the day they were declared innocent and released.

This is the story of four friends who, after enduring years of mental suffering and isolation from society, became activists and are campaigning to end the death penalty.

Still suffering from post-traumatic stress disorder and depression after being incarcerated for so long despite their innocence, they joined the association of death row exonerees, Witness to Innocence. Calling themselves the “Resurrection Club”, they travel from state to state, supported by their wives and children, to lobby for an end to the death penalty.

More than 150 death row survivors have been found innocent and exonerated in the US and many have joined Witness to Innocence. This is a story of friendship and love, a trip through the US – from Texas to Washington DC – to end an inhuman and unjust criminal justice system.

By Guillermo Abril and Alvaro Corcuera

In November 2009, we first heard about the 100-plus people in the United States who were once sentenced to death for a crime they didn’t commit.

Juan Melendez, a man from Puerto Rico who spent 18 years on death row in Florida, showed us a documentary about his life in Madrid. He talked to us about Witness to Innocence, the only organisation in the US which brings together death row exonerees and their relatives, and told us they were going to meet soon.

Soon after, 21 survivors gathered in Birmingham, Alabama. One of us travelled there to write an article for El Pais Semanal, the magazine we work for in Spain. We decided we needed to attend another Witness to Innocence meeting, this time with a camera. That’s how the idea for “Surviving Death Row” was born.

We didn’t have any experience in making documentaries – we were print journalists. The first step was building a team. We brought in Luis Almodovar, a colleague at El Pais, as director of photography for the film.

Using our own money in the beginning, we were motivated by our passion. We travelled with cameras for the first time to Richmond, Virginia, in 2011, to a similar gathering to the one that had happened in Alabama a year and a half earlier. This was the first of five trips in the years to come.

Capital punishment is still legal in 31 US states and 2,905 people were on death row as of July 1, 2016. Last year, 20 executions took place in the US. Texas has executed the most convicts since the death penalty was reinstated in the US in 1976: about a third of the nearly 1,500 people dead as a result of capital punishment.

In the summer of 2011, we made a two-week road trip through Texas. The exonerees spoke at universities, schools, churches, radios and community centres, trying to turn around widespread public opinion in favour of the death penalty in the region. Greg, Albert, Ron and Shujaa were four of those exonerees, travelling together in a van. They would become the main characters in our film.

We were deeply affected by our visit to Albert’s home, a run-down trailer on his sister’s ranch. Albert had spent 13 years on death row and we discovered he had a small mental disability. He showed us his horses and we accompanied him to his various jobs, which included working as a junk seller.

On later trips, we travelled to Oklahoma, Missouri, Mississippi, Detroit and Washington DC and visited more exonerees in their homes.

Greg told us how he had been forced to give up his daughter for adoption when he was wrongfully sentenced to death for killing his wife. Ron showed us the ruins of the American dream in downtown Detroit where he grew up as a kid and where he still rides his Harley. Shujaa invited us to his family’s house on Father’s Day where he shared a meal of Southern-style crabs with his wife, sons and grandsons. His wife talked to us about the day she met him in prison. She was a white nurse. He was a “dangerous” African-American inmate, according to the authorities. They have been together since he was freed in 1981.

Watching the exonerees when they got together was a moving experience. They had long, deep conversations. Besides being friends, they were “pain mates”, as we called them: people who shared the experience of surviving a miserable place. Only after they left prison had they realised that there were others like them, who understood what they had gone through. When they met, they did not have to justify anything. Nobody judged them or asked them questions. They just laughed and enjoyed their freedom together.