An Irish police investigation into allegedly blasphemous comments made by Stephen Fry has been dropped after detectives decided there were not enough people who had been outraged by the remarks.

Police launched an investigation into the presenter, author and comedian after he described God as “capricious”, “mean-minded”, “stupid” and an “utter maniac” during an appearance on Irish television show “The Meaning of Life” in February 2015.

The comments were widely reported but did not become a legal matter until a man complained last year, prompting a police enquiry. 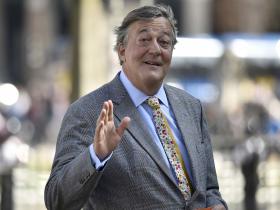 Under Irish law, it is illegal to use words that are “grossly abusive or insulting in relation to matters sacred to any religion,  thereby intentionally causing outrage among a substantial number of adherents of that religion”.

After initial inquiries, officers decided that not enough people had been outraged by Mr Fry’s remarks to warrant further investigation, according to the Irish Independent.

A source told the paper: “This man was simply a witness and not an injured party. Gardaí (Irish police) were unable to find a substantial number of outraged people.

“For this reason the investigation has been concluded.”

Asked in 2015 by the programme’s host, Gay Byrne, what he would say to God if he arrived in heaven, Mr Fry replied: “I’d say, bone cancer in children? What’s that about?”

“How dare you? How dare you create a world to which there is such misery that is not our fault? It’s not right, it’s utterly, utterly evil.

“Why should I respect a capricious, mean-minded, stupid god who creates a world that is so full of injustice and pain?

“We have to spend our life on our knees thanking him? What kind of god would do that?

“The god who created this universe, if it was created by god, is quite clearly a maniac, an utter maniac, totally selfish.”

The man who made the initial complaint about Mr Fry is said to have been satisfied that Irish police had investigated the matter fully and told detectives he was merely doing his civic duty in reporting it.