Bonobos Use the Power of Female Friendship to Overthrow Male Hierarchy.

Having an “object to be loved and played with,” “someone to take care of the house,” and the “charms of music and female chit-chat.” These are some of the pros of holy matrimony, according to celebrated naturalist and hopeless romantic Charles Darwin.

In 1838, he penned a note-to-self, weighing the aforementioned plusses against the bummers of being “forced to visit relatives and bend to every trifle,” having “less money for books etc,” and “perhaps quarrelling.” Six months after deducing that a wife would be “better than a dog,” Darwin married his cousin, as per the Victorian custom of interbreeding.

“He never wrote a list of reasons why he would or wouldn’t be a good husband,” notes Dr. Amy Parish: biological anthropologist, primatologist, and “Darwinian feminist”.

“Being a Darwinian feminist means you’re both a scientist and a feminist,” says Amy, who is based at the University of Southern California. “There are questions we have in common, which we could inform from both perspectives.”

When Amy arrived at the University of Michigan as an undergrad in the 1980s, she noticed “an antagonism” brooding between her science and gender studies departments. Science had been (and remains) a male-dominated discipline, and evolutionary psychologists favouring “essentialism” used science to validate patriarchal norms.

In other words: “They’ll say, ‘All females want an older, resource-laden man, and all males want a young, fertile female,’ Amy explains. “That’s called ‘essentializing’ because you’re saying there’s just one essence to male and female.” She says her past professors would say things like, “‘Look at chimpanzees; they have a pattern of male dominance, and humans do too. [So that shows that] maybe we’ve had male dominance for the last five million years, since our last common ancestor.'” In this way, science has been used to suggest that male dominance is natural.

Female bonobos use their collective power to control food and dominate males.

Dissatisfied with this approach, Amy and her feminist-scientist peers (including “the alpha female of primatology,” Sarah Hrdy) noticed that both fields were actually asking the same questions: Who has power? How do you get it? How do you use it? What is it good for? “So I thought, ‘Why don’t we have conversations where feminists and scientists can inform each other?'”

Thus, Darwinian feminism was born, and continues to evolve. For the past 20 years, Amy has studied captive populations of bonobo apes. Along with chimps, they’re Homo sapiens’ closest living relatives. But unlike their cousins, bonobos have never been known to kill their own kind and, moreover, they live in matriarchal societies.

“[Female bonobos] make really strong friendships with other females. Part of that is sexual. They have a lot of sexual interactions with each other,” Amy says. Female bonobos also back each other up, forming cohorts. They use their collective power to control food and dominate males. 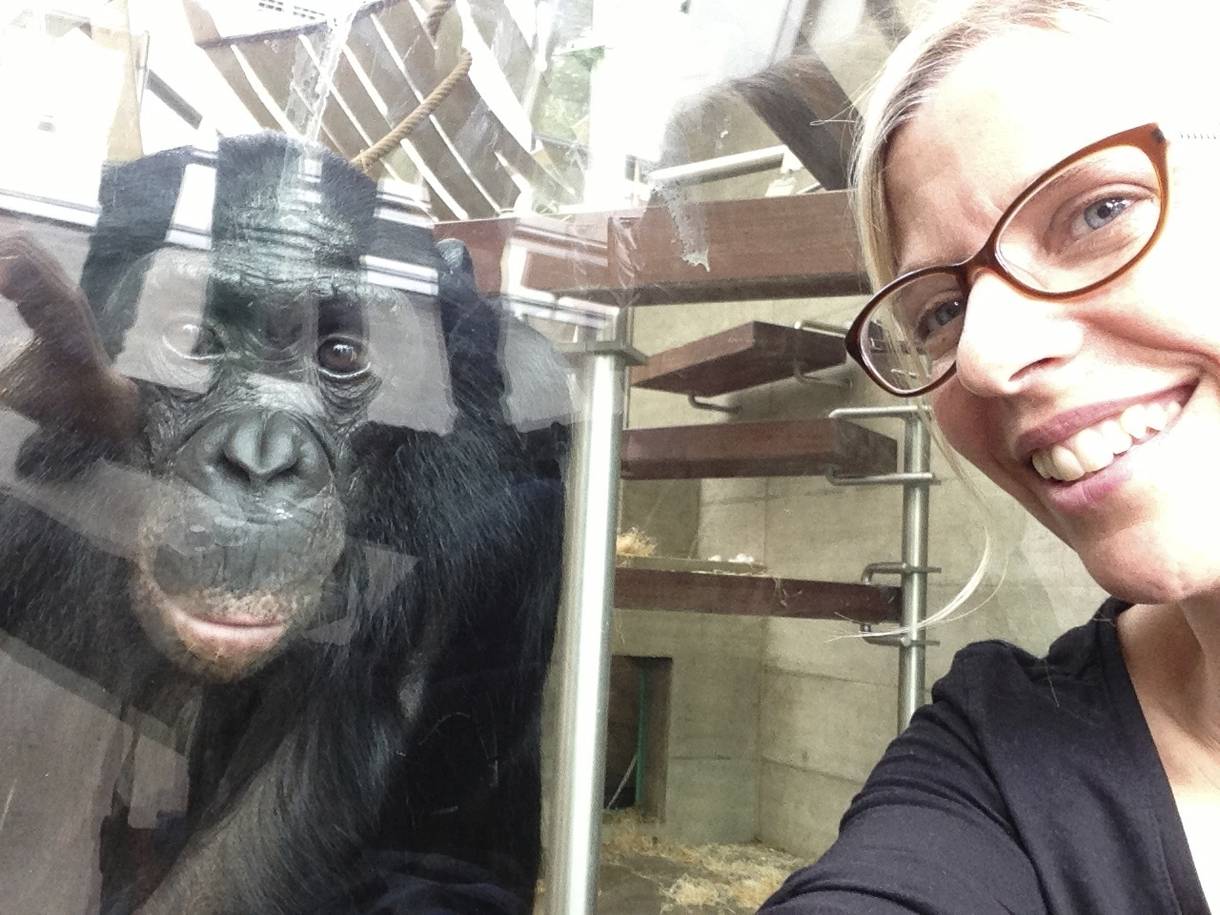 Amy with a Bonobo

How do female bonobos rise through their hierarchy? “By launching seemingly unprovoked attacks on males,” says Amy. “Ripping off fingernails, toenails, biting testicles. One time they bit a penis in half. So you can’t really paint them as the peace-loving alternative to our other closest relative, the chimp. It’s interesting that people would want to. I think it’s because it’s such a foreign concept to us that females would be dominant and aggressive toward males. It makes no sense, so it’s just discounted.

“As I saw over and over in different zoos, females were attacking males,” she says. “I’d bring it up with the zoo staff and everybody just thought it was something wrong with their particular male. They’d have some folkloric story about what was wrong with him: ‘He was ill when he was young. He was taken home and nursed back to health. That made him soft.’ It never occurred to them that this could be the natural pattern – that females were just in charge.”

As female bonobos mature, they stop going through males bonobos to access food.

In contrast to primatology, Amy has also studied human female behavior. Her research on San Diego’s ‘Mile of Men‘ competition, a matchmaking stunt run by local radio stations , gave intriguing insight to mate choice patterns in women. “You get all these men, who are presumably eligible bachelors, to come down to one intersection and line-up with numbers. [Women] developed all these novel strategies, like bring your Starbucks cup over with your telephone number on it. Some even brought little bags of candy with their phone numbers,” says Amy. 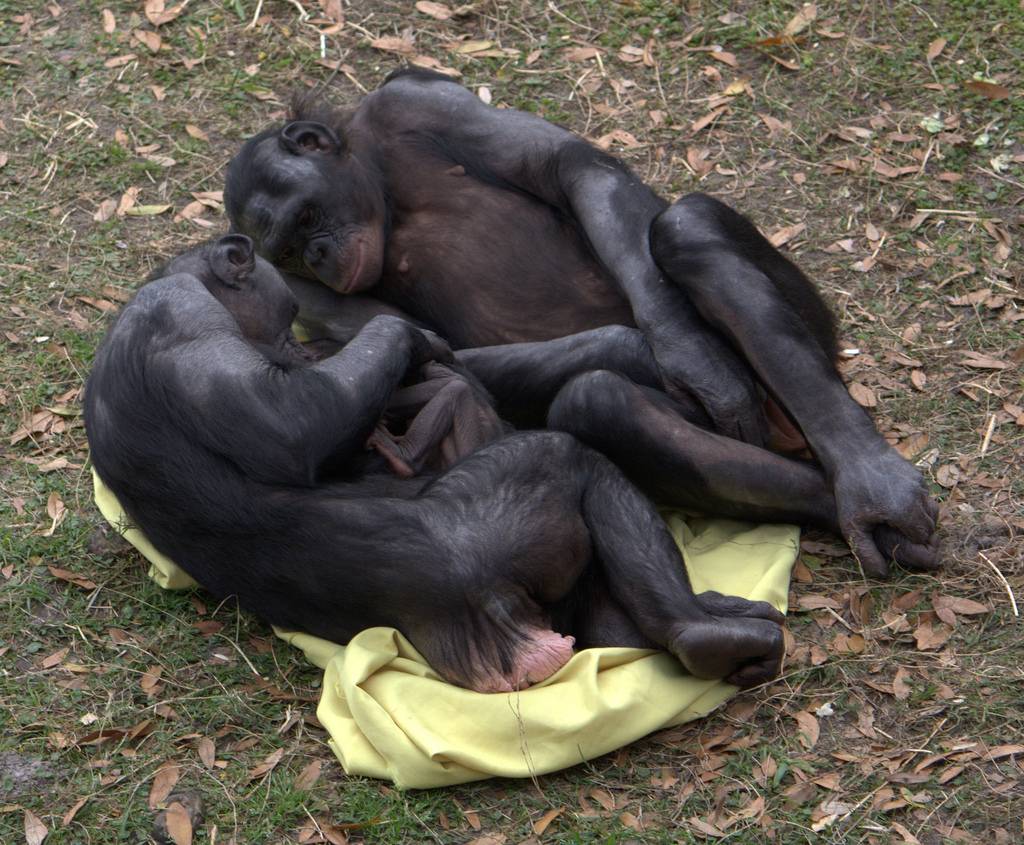 “It’s not like you couldn’t do this at a bar or the beach. Even though women should be able to ask men out, and they do, the social norm is that men are the askers and women are the ones waiting around. To be given the cultural permission to pick, women get really excited and motivated. And there’s a free dinner in a nice restaurant, so there are women who are like, I really want the dinner.”

Amy’s seen similar (arguably improved) versions of this behaviour in bonobos. But as female bonobos mature, they stop going through males bonobos to access food. They just take it. If males want food, on the other hand, they must give something in return.

What do they offer? Sex.

“That’s a real twist on people’s thinking,” says Amy. “The standard idea has been that males are more sexual than females. They’re less choosey. They have higher libidos. That goes back to Darwin and earlier. It comes from religion, it comes from Victorian values: the coy, reluctant female who has to be persuaded. Here we have, ‘What, you want this food? Offer me sex and we’ll have this exchange.’

“It shows that gender roles are not set in stone; they’re very fluid, and females can be as sexual as males. That’s moving away from essentialism.”

How different are humans to our primate kin? There are far more similarities than differences, Amy says. “Humans always want to think they’re special or unique, or at the pinnacle. For the most part, we’re not.” Rather, we sit on a spectrum with a lot of other animals, including bonobos: the feminists of the great ape family.

“The goal of feminism is to behave with unrelated females as though they are your sisters. It’s all about the sisterhood. We can talk about how human feminism has succeeded, and the long road in front of us, but I’d say the glass is 60 percent full for humans and 99.9 percent full for bonobos.”