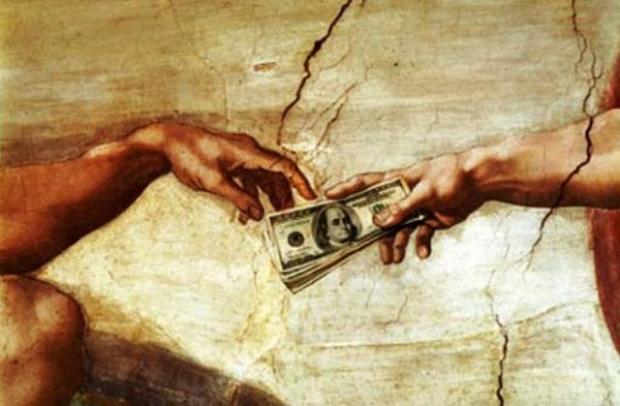 “Spiritual Capitalism” Yes. Apparently it is a thing now.

In a recent interview, Instagram co-founder Mike Krieger discussed the nuances of what made his invention a billion-dollar app: an intense focus on quick upload time, user friendly features, and, well, luck. When Instagram began adding sponsored photos into user feeds, uproar ensued: how dare this Facebook-owned company try to make money from my free app.

A similar denouncement was bellowed with Facebook’s monetization efforts. Sure, it has that ‘icky’ feeling—damn capitalists!—but it’s a business. Capitalization is part of the game. More and more, it’s happening on both sides of this equation. One continually emerging trend is the user-generated income streams couched in New Age psychobabble pretending to be something it patently is not.

Product placement was addressed early on Youtube. On Instagram it’s harder to detect given that it’s often disguised by neo-spiritual verbiage. Gaze at the endless barrage of yoga-inspired posturing and you’ll see no dearth in the growing spiritual capitalism movement.

Thomas Frank addressed this issue when pointing out that seventies business mentality took its cue from sixties radicalism. Corporations profited by selling the cult of the individual. No longer did you have to rebel against society while dressed like a slob; anarchy gained an outfit. Our ancestors knew freedom comes at a cost. We’re taking that concept to a new level. To witness the evolution of this ideology simply peek into boutiques on Bedford Ave and Abbot Kinney.

Or simply follow any number of ‘celebrity’ yogis, nutrition ‘coaches,’ and other lifestyle gurus on Instagram. Spirituality does indeed have a price, but no longer does it require silent retreats, self-reflection, or simply being a good person. It is for sale, and there are plenty of people willing to sell you their brand

In her article, ‘Taking Liberties: Cults and Capitalism,’ from Issue No. 30 of The Baffler, Ann Nuemann writes about the Synanon cult that set up camp in Santa Monica in the seventies. Self-styled guru Chuck Dederich eventually grew so power-bloated that his campus imploded, acolytes fleeing to Venice and beyond. Like many cult leaders,

Dederich kept his hands on the purse strings while everyone else was forced to live impoverished for their spiritual good.

Most cults operate this way, though Synanon made its money not only from tithing, but from Syanon Industries, which “operated gas stations, manufactured and distributed merchandise (such as Synanon-branded pens, rulers, and T-shirts), and begged and bartered for tax-deductible goods.” Dederich was ahead of the spiritual capitalism curve, the reverberations of his empire resonating today in the spiritual doublespeak of yoga lifestyle brands and fresh-pressed juiceries.

Billions of dollars are spent where spirituality meets narcissism.

In a culture in which people are more concerned with being brands than humans such a noxious cocktail was inevitable. We’re living on our own Island of Misfit Toys: if you tell everyone they’re broken, they’ll buy into it. As a solution these Insta-lebrities offer easy-to-digest solutions to life’s pressing problems (the universe loves you!). And they can be humble, too: Sure, these leggings might not fix you, but at least you’ll look good trying.

As Neumann expresses it,

The castigation of narcissism…has done little to wrest the yoga mats and herbal teapots from our tremulous hands. Nor has it convinced us to put down our self-chronicling digital devices.

Because, if you didn’t take a photo of it (and tag your sponsor), it didn’t happen.

I’m reminded of the beautiful moment when a bird landed on Bernie Sanders’s podium. Without reading anything metaphysical into it, it was simply that: a moment. Yet within a day my inbox and feeds were flooded with ‘Birdie Sanders’ mugs and stickers for sale. Like Insta-yogis, no one seems to let a moment be a moment anymore.

A hero of modern yoga is Mahatma Gandhi, who you might recognize from the Apple ad. While Gandhi is generally unquestionably revered, he was a flawed man. He announced his (and by extension, his wife’s) celibacy without discussion; he forced servants and nieces to sleep naked cuddled with him to prove his spiritual prowess.

What I always respected about Gandhi, though, was his constant growth. His dietary restrictions might be considered an eating disorder today, but he was steadfast in his devotion in locating his greatest good. Then there was the loincloth, probably his most symbolic aspect beyond the baldhead and glasses.

To fight British rule Gandhi set off a national revolt in fashion. Combating Indian reliance on foreign products he inspired many to invest in spinning wheels. He himself lived in a dhoti of simple making. The initiative was twofold: get Indians off the teet of British commerce and empower them to take control of their lives. Nationalistic and economic. Gandhi wanted to see people rise above poverty.

In a nation of plenty more is never enough. The capitalists have won, selling spirituality as shamelessly as whatever other product they can produce. Sadly, the people who should be fighting are nothing more than its over-sugared servants, desperately fighting for their fifteen seconds of Insta-fame.