As mass shootings filter in and out of the news cycle at an almost dizzying pace with each new tragedy, the FBI has continued to probe why these atrocities continue and what can be done to stop them.

In a new report released Wednesday, the bureau shed light on behaviors of shooters before they acted out, finding most obtained a gun legally and did not have diagnosed mental health issues, points that run contrary to some popular beliefs.

Active shooting incidents have continued to plague the nation but last year, there were 30 incidents across the U.S. — the highest number since the FBI began tracking the phenomenon. Last year also broke a record for the highest death toll in any single year.

“Faced with so many tragedies, society routinely wrestles with a fundamental question: can anything be done to prevent attacks on our loved ones, our children, our schools, our churches, concerts and communities?” the study says. “There is cause for hope because there is something that can be done.” 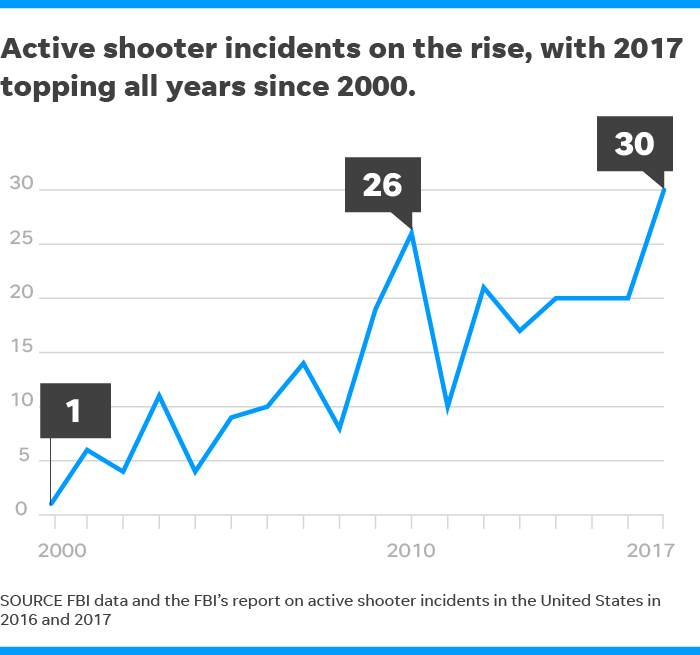 The 30-page report examines active shooter incidents from 2000 to 2013 and suspects in 63 cases, finding suspects showed signs before they attacked but law enforcement wasn’t notified in more than half the cases until it was too late.

Forty percent of suspects purchased a firearm or multiple guns legally for the sole purpose of an attack. Another 35 percent already legally owned a gun before planning an attack, meaning 75 percent of active shooter incidents reviewed by the FBI legally owned the gun they used in the attack.

The remaining suspects stole, borrowed or purchased a weapon illegally.

The FBI could only verify that 25 percent of the gunmen examined in the study had any type of mental illness diagnoses, including disorders affecting mood, anxiety and personality.

The study noted, although, that a large portion of shooters, about 62 percent, were dealing with stressors in their lives such as depression, anxiety and paranoia before their attack.

Those symptoms don’t mean the suspect was necessarily dealing with a mental illness and the conclusion that all active shooters are mentally ill is both “misleading and unhelpful,” the bureau said.

“In light of the very high lifetime prevalence of the symptoms of mental illness among the U.S. population, formally diagnosed mental illness is not a very specific predictor of violence of any type, let alone targeted violence,” the study says. “Careful consideration should be given to social and contextual factors that might interact with any mental health issue before concluding that an active shooting was ’caused’ by mental illness.”