Gun deaths of school-age children in the United States have increased at an alarming rate, with 38,942 fatalities among 5- to 18-year-olds from 1999 to 2017, according to a new study by Florida Atlantic University’s Schmidt College of Medicine.

Indeed, spikes in gun deaths over the past decade amount to epidemics, researchers said.
“It is sobering that in 2017, there were 144 police officers who died in the line of duty and about 1,000 active duty military throughout the world who died, whereas 2,462 school-age children were killed by firearms,” said Dr. Charles Hennekens, the study’s senior author and an academic adviser at the medical college.
The study, to be published in the American Journal of Medicine, found that children are being gunned down in staggering numbers, with the death rate six to nine times higher than other developed nations.
The gun deaths included 6,464 children between the ages of 5 and 14 years old (an average of 340 deaths per year), and 32,478 deaths in children between 15 and 18 years old (an average of 2,050 deaths per year), according to the study. 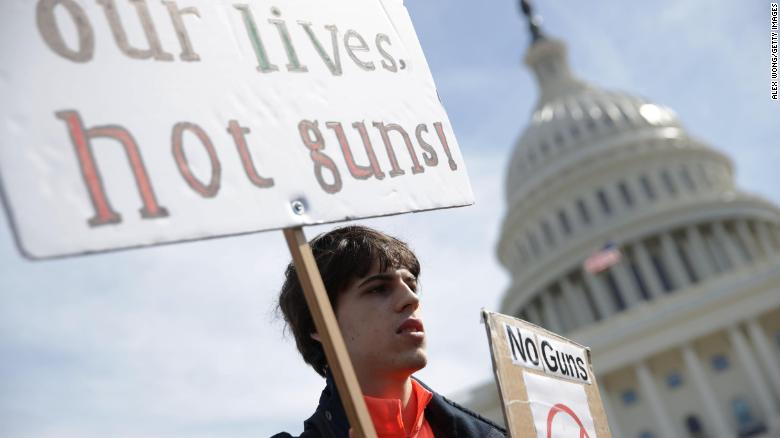 Maximilian Steubl of Churchill High School in Potomac, Maryland, participates in a gun control rally on March 14, 2019 on Capitol Hill in Washington.
Of the deaths, 86% involved boys, the study found. Black children accounted for 41% of those killed, though in recent years they’ve comprised just 14% of the US population, US census data show.
“Among blacks, the annual average percent change of 9.5% for firearm-related mortality among 5 to 14-year-olds from 2013 to 2017 exceeded the 7.8% for overall deaths among 15 to 24-year-olds during the early years of the human immunodeficiency virus epidemic from 1987 to 1995,” the study said.
The research should have public policy implications, Hennekens said.
“We need more analytic studies on this, but in the meanwhile, we believe that trying to combat the epidemic of homicide due to firearms without addressing firearms is like combating the epidemic of lung cancer due to cigarettes without combating cigarettes,” he said.
“To me, it’s tragic that this is going on.”

Black children between 5 and 14 years old began to experience statistically significant increases in gun deaths in 2013, the study found. And from 2013 to 2017, racial inequalities in firearm deaths between blacks and whites jumped significantly.
The study found these listed causes of death among the children: 61% from assault; 32% from suicide; 5% accidental; and 2% undetermined.
In the 5-to-14-year-old age group, accidents accounted for 12.8% of cases (830 deaths); suicide, 29.6% cases (1,912 deaths); assault, 54.8% cases (3,545 deaths); and undetermined, 2.7% (177 deaths), according to the study.
US leads the world in child gun deaths
For those 15 to 18 years old, the cause of death was listed as accidental in 3.5% of cases (1,121 deaths); suicide, 32.9% (10,688 deaths); assault, 62.3% (20,247 deaths); and undetermined, 1.3% (422 deaths).
The study used data from the Multiple Cause of Death files of the US National Center for Health Statistics (NCHS).
The researchers found statistically significant increases in gun deaths beginning in 2009, with what they termed an epidemic among 5- to 14-year-olds. A second epidemic, beginning in 2014, involved those in the 15-to-18-year-old age group.
The epidemics continued through 2017, the most recent year of available US mortality data.
The study said the epidemic poses clinical, public health and policy challenges. It singled out the 1996 Dickey Amendment as a major factor prohibiting analytic studies on the issue.
In 1996, Congress removed $2.6 million — the amount the Centers for Disease Control and Prevention spent on gun research the year prior — from the CDC’s budget and passed the so-called Dickey Amendment, named after late Republican Rep. Jay Dickey of Arkansas.
Critics said the amendment ultimately led to the CDC halting gun violence research.
A study last year in the New England Journal of Medicine found that death by gunshot was the second-highest cause of death in the United States in 2016 among children and adolescents, ages 1 to 19.
The United States led the world in 2016 in the rate of firearm deaths in youth among countries with available data. The rate in the US was 36.5 times higher than in a dozen comparable high-income countries around the world; the rate of firearm deaths was five times as high compared with a sampling of low- to middle-income countries.
Source: https://cnn.it/2VFZOdR