Saudi Arabia’s crown prince, speaking at a major investment conference, has promised his kingdom will return to “what we were before – a country of moderate Islam that is open to all religions and to the world”.

Mohammad bin Salman bin Abdulaziz Al Saud made the announcement at the beginning of the landmark Future Investment Initiative in Riyadh on Tuesday.

The country would also do more to tackle extremism, the prince said. “We will not waste 30 years of our lives dealing with extremist ideas; we will destroy them today,” he said when asked by Maria Bartiromo of Fox Business Network.

“It was not like this in the past… We will end extremism very soon,” the prince added, in his most direct criticism of Saudi Arabia’s conservative religious establishment to date.

Expanding on his earlier comments in an interview with the Guardian, the crown prince said that the country’s conservatism was in part fallout from Iran’s Islamic Revolution.

“What happened in the last 30 years is not Saudi Arabia. What happened in the region in the last 30 years is not the Middle East. After the Iranian revolution in 1979, people wanted to copy this model in different countries, one of them is Saudi Arabia. We didn’t know how to deal with it. And the problem spread all over the world. Now is the time to get rid of it.

“We are a G20 country. One of the biggest world economies. We’re in the middle of three continents. Changing Saudi Arabia for the better means helping the region and changing the world. So this is what we are trying to do here. And we hope we get support from everyone.”

Saudi Arabia, an absolute monarchy, is governed under an puritanical form of Sunni Islam known as Wahabism; it is extremist versions of Wahabism that are espoused by jihadist movements such as al-Qaeda and Isis.

In the wake of 9/11, the Saudi authorities have worked alongside the US and other Western countries to tackle radicalisation and terrorism funding – but have often been criticised for not doing enough.

The claims from Prince bin Salman will be met with scepticism internationally, as Saudi’s hardline clerics still wield much power and influence in the country. Rights groups continue to condemn the state’s human rights violations, the precedent for many of which is based on the Saudi interpretation of Quranic law.

Prince bin Salman, who was suddenly appointed heir to the throne by his father King Salman bin Abdulaziz Al Saud earlier this year, is viewed by many as the face of the modern kingdom.

The 32-year-old is the driving force behind ‘Vision 2030’: Saudi Arabia’s long-term economic and social policy designed to wean itself off dependence on oil, and is popular for his reforms to the country’s ineffective state bureaucracy.

Last month, it was announced women in Saudi Arabia would be finally be given the right to drive, a symbolic move signalling changes to the institutionalised discrimination against women in the country.

While Prince bin Salman has built his reputation as a bold and socially liberal reformer, critics note his hawkish foreign policy. As defence minister – a position he has held since 2015 –  he has attracted censure over his role in Saudi Arabia’s bloody intervention in the Yemeni civil war, as well as his aggressive stance on Iran.

The prince is also regarded as one of the primary decision makers behind the Gulf states’ recent cutting of ties with Qatar.

Also at the Future Investment Initiative, Prince bin Salman announced the creation of Neom, a new $500bn (£381m) independent economic zone to be built on the border with Jordan and Egypt.

The 2025 project will operate using alternative energy and serve as a worldwide technology innovation hub, he said.

The conference, which runs until Thursday, is aimed at showing that Riyadh is opening itself up to the modern world and diversifying its revenue streams, following a global plunge in oil prices. 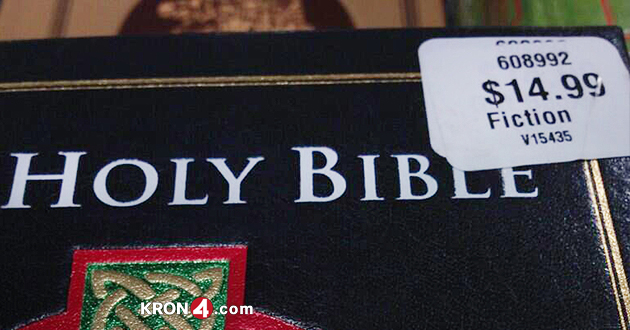 It is a command that led the leading atheist Richard Dawkins to claim that the God of the Old Testament was “a vindictive, bloodthirsty ethnic cleanser … a genocidal … megalomaniacal, sadomasochistic, capriciously malevolent bully”.

For God had ordered the Israelites to slaughter the apparently sinful Canaanites, saying: “You shall not leave alive anything that breathes. But you shall utterly destroy them.” And, according to a passage in the Old Testament’s Book of Joshua, they did just that:

“Thus Joshua struck all the land, the hill country and the Negev and the lowland and the slopes and all their kings. He left no survivor, but he utterly destroyed all who breathed, just as the Lord, the God of Israel, had commanded….  He left nothing undone of all that the Lord had commanded Moses.” (Joshua. 10:40, 11:15)

However, a new genetic study has found that the Canaanites actually managed to survive this purge of their traditional homeland, passing on their DNA over the centuries to their numerous descendants in modern-day Lebanon.

Scientists managed to extract enough DNA from the remains of five people – found in the former Canaanite city state of Sidon and dated to about 3,700 years ago – to sequence their entire genome.

They then compared this to 99 modern Lebanese people and discovered they had inherited about 90 per cent of their genetic ancestry from their ancient forebears.

A paper about the study in the American Journal of Human Genetics said that there had been “uncertainties” about the fate of the Canaanites.

“The Bible reports the destruction of the Canaanite cities and the annihilation of its people; if true, the Canaanites could not have directly contributed genetically to present-day populations,” the researchers wrote.

“However, no archaeological evidence has so far been found to support widespread destruction of Canaanite cities between the Bronze and Iron Ages: cities on the Levant coast such as Sidon and Tyre show continuity of occupation until the present day.

“We show that present-day Lebanese derive most of their ancestry from a Canaanite-related population, which therefore implies substantial genetic continuity in the Levant since at least the Bronze Age.”

The degree of genetic closeness between the ancient Canaanites and modern Lebanese people was something of a surprise as the area was repeatedly fought over and conquered by various different groups throughout history, although some of them did leave genetic traces that survive to this day.

One of the researchers, Dr Marc Haber, of The Wellcome Trust Sanger Institute, said: “The present-day Lebanese are likely to be direct descendants of the Canaanites, but they have in addition a small proportion of Eurasian ancestry that may have arrived via conquests by distant populations such as the Assyrians, Persians, or Macedonians.”

He added that it had been a “pleasant surprise” to be able to extract and analyse DNA from human remains that were nearly 4,000 years old, particularly as they were found in a hot environment.

The Canaanites are roundly condemned in the Old Testament – they were the inhabitants of Sodom and Gomorrah, two cities destroyed with fire and brimstone directly by God, according to the Book of Genesis.

While the Bible suggests they were wiped out by the Israelites under Joshua in the land of Canaan, later passages appear to contradict this and state that there were survivors. Some Biblical scholars have argued the passages describing the Canaanites wholesale destruction are hyperbole and inconclusive, and the genetic research would indeed appear to indicate the slaughter was much less extensive than described.

Also known as the Phoenicians, the Canaanites proved to be great seafaring traders and established colonies across the Mediterranean.

Austria on Sunday becomes the fifth European country to ban wearing full face veils such as the burqa and niqab in public, a move prompted by the recent wave of migrants from Muslim countries seeking asylum.

The prohibition will also apply to scarves, masks and clown paint that cover faces to avoid discriminating against Muslim dress.

The Anti-Face-Veiling Act applies to anyone in public places and buildings, including schools, shopping malls and public transportation.

Other measures aimed at refugees to promote integrating them into Austria include compulsory courses to learn German and the country’s values.

Although there are no reliable numbers, the ban is likely to affect only a few hundred Muslim women in the country who now cover their faces. Also affected are some of the estimated 70,000 Arab tourists who visit Austria’s popular Zell Am See ski area every year.

The new law has angered Muslim groups. The Islamic Religious Authority of Austria calls it an infringement on privacy, religious freedom and freedom of opinion.

Austria’s burqa ban “is a clear discrimination of Muslim women, who once again become victims of a policy of coercion,” said Yeliz Dagdevir, 36, a Muslim psychologist in Lustenau who does not wear a veil. “Muslims are obviously still not a part of this country,” she added.

People who obscure their face in public can be fined $175. Similar laws are in force or about to go into effect in Belgium, Bulgaria, France and Switzerland. Germany has a partial ban on face coverings that applies only when driving.

Austria’s parliament approved the law in May after politicians, including Foreign Minister Sebastian Kurz — a front-runner to become chancellor in the Oct. 15 parliamentary election — argued that veils hinder Muslim women from integrating into Austria’s predominantly Catholic society.

The burqa is “not a religious symbol but a symbol for a counter-society,” Kurz told Austrian broadcaster ORF in August. 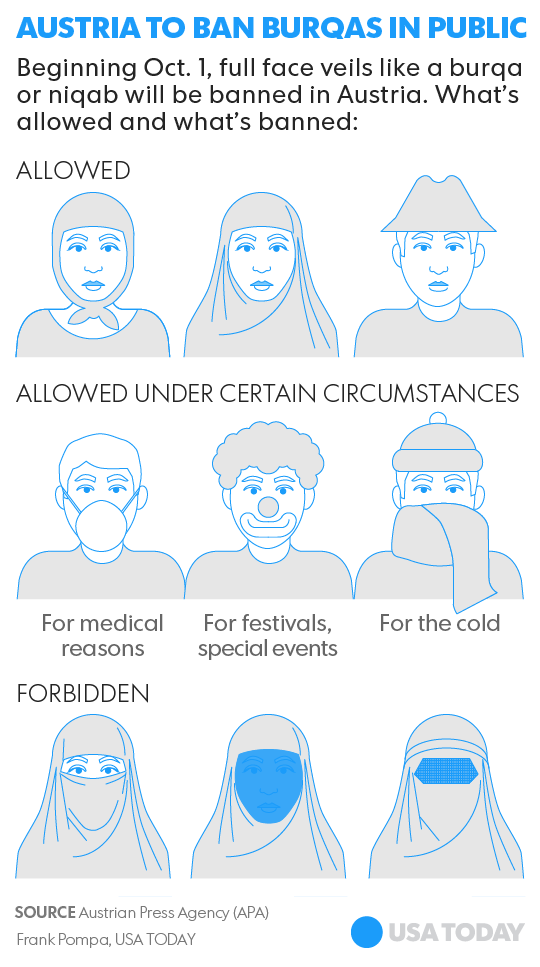 “We want to be able to look into people’s faces in our society,” added Heinz-Christian Strache, chairman of the right-wing Freedom Party of Austria, at an August news conference:

Austrian President Alexander Van der Bellen has criticized the law. “It is every woman’s right to always dress how she wants,” he recently told a group of students.

Islam is the second most widely practiced religion in Austria, with 7% of its 9 million people practicing it. France has the largest Muslim population in Europe, estimated at about 6 million.

“I am supporting the new law because women become invisible in public with full face veils,” said Erika Reisinger, 64, a commercial clerk in Krems.