For nearly a decade, a white stone statue of Mary and baby Jesus has stood outside Ste Anne des Pins Catholic church in downtown Sudbury. At times vandals had targeted the statue, leaving the head of baby Jesus rolling on the ground nearby.

About a year ago, the head of baby Jesus was knocked off again. This time, it seemed, the vandals had taken it with them.

The statue stood headless for months as the church’s priest, Gérard Lajeunesse, asked local businesses about crafting a new head. It would have to be custom-made, he was told, and could cost as much as C$10,000 ($7,500).

It was around then that he received a knock on his door from a local artist. Heather Wise had been walking the church’s grounds with a friend when she noticed the headless statue. 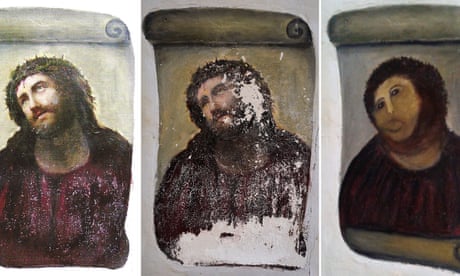 “I was so sad,” she told Sudbury.Com. “My feelings were hurt when I saw it, because I thought, ‘Who would do that?’ It’s just not a positive feeling to see that. I said ‘I’m an artist, I would like to fix it.’”

She had learned how to sculpt at a local college, but had never worked with stone. Still, she felt compelled to help. “I knocked on the door, talked to the priest and we’ve been getting this together, because we had to find out a way of doing it.”

Wise spent hours crafting the bright orange clay head. “To do a statue of baby Jesus for a church is like an honour of my entire art career,” she said, explaining that she would aim to sculpt a permanent head out of stone by next year.

The new head was attached about two weeks ago. Reaction was swift; parishioners reacted with hurt, surprise and disappointment, Father Lajeunessetold the Canadian Broadcasting Corporation.

While he understood their point of view – “It really is shocking to the eyes because of the big contrast in colour” – he was stumped at how to handle the situation. “I wasn’t trained for this in seminary.”

He stressed that the new head – whose features are rapidly eroding in the rain – is just temporary. “It’s a first try. It’s a first go. And hopefully what is done at the end will please everyone,” he said. “She did this out of the goodness of her heart.”

The head sparked bemusement on social media, with some pointing out the striking resemblance between baby Jesus and Maggie Simpson.

Others defended the artist’s good intentions, while others dubbed her effort to be an Ecce Homo for the new age – a reference to the botched attempt by a Spanish octogenarian to restore a peeling fresco of Jesus Christ. That was described as the “worst restoration in history” by local press.

“No wonder Mary has her eyes closed,” wrote one commenter on the CBC website, while another pointed out: “Since nobody knows what Jesus looked like, what difference does it make?”